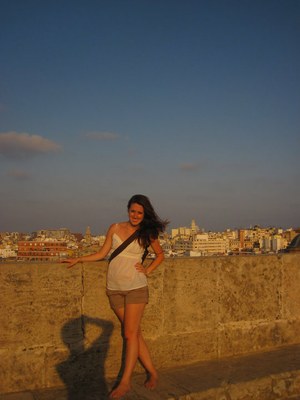 Ashely Richards attended Miami University where she double majored earning a B.S. in Microbiology and a B.A. in Spanish.  During undergrad, she was afforded opportunity to study abroad at the Universidad de Alcalá.  Ashley is currently a second year PhD student working towards a degree in Microbiology and Immunology at the University of Louisville.

“Ashley is a very motivated and driven bright young scientist who will have a bright future” – Dr. Abu-Kwaik, Professor in the Department of Microbiology and Immunology

What brought you to the University of Louisville?

I found that the Microbiology and Immunology research program at the University of Louisville best met my needs for what I wanted to do for my graduate work.

Specific areas of research (how you chose this research, why it interested you):

My research centers on bacterial pathogenesis.  I chose this specific topic because the idea that something so small can cause so many problems intrigues me.

How would you describe your area of study/ specific research to your grandmother?

My research focuses on the bacteria Legionella pneumophila which causes a severe pneumonia, known as Legionnaire’s disease. The bacterium, when inhaled, gets into the lungs and survives within macrophages. Macrophages are supposed to be one of the body’s defenses against microbes, by seeking out and “eating” them. The bacterium is capable of hijacking these host cells causing them to instead help the bacteria by providing it with food and safe shelter. We look at the how the bacterium is capable of surviving and manipulating the macrophage.

What made you go into this field of study?

While in high school, I worked with someone that majored in Microbiology. At the time I had not considered it, or even realized it was an option. Then I thought, “Hey that might be pretty cool.” Turns out it was!

To date, I have been an author on one research publication, four review articles, and five abstracts (all listed at the end of the interview). I was awarded the Graduate Research Fellowship from the National Science Foundation and Excellence in Research award from the Department of Microbiology and Immunology. I have also received three intramural research grants during undergrad.

How do you think this advanced degree will change your role in society?

I have been getting involved more in outreach. There are so many people who do not understand what science researchers do and students who do not realize the career potentials in research. I myself did not know until I started undergrad research in college. I see my role in society as being a liaison between layman and researchers.

What accomplishment, academic or otherwise, are you most proud of?

I think my proudest academic moment was receiving a fellowship from the National Science Foundation (NFS).  The fellowship covers a yearly stipend of $32,000 and $12,000 in tuition expenses for three years.  Only a small number of UofL students have received this prestigious graduate research fellowship.

What do you feel is the greatest challenge that graduate students face and how have you dealt with this challenge?

Failure-- a lot about research involves failure. There are many failed experiments, for many reasons. It can be very frustrating when experiments work one day but not the next. You spend a lot of time troubleshooting. It happens to everyone, and you just have to learn to deal with it and take it as a learning experience.

I live with my fiancé, dog (Abbey), and two rats (Six and Racetrack).