by Bria Staten-Favors, Communications and Marketing

Beth McPheron had no idea that she was going to win the University of Louisville Parent of the Year Award this time around. It’s the second time her son Drew has nominated his mom for the award. Drew, who has muscular dystrophy, said his mother has to feed him, dress him and even got to class and take notes for him. He described her as “amazing.”

“I’m still shaking,” McPheron said when asked how she felt about being honored at the Oct. 24 ceremony. 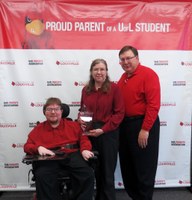 The Parent of the Year Award, now in its eighth year, lets students recognize their parents for the help and support they've given throughout the students' lives. UofL students were encouraged to nominate a family member and a selection committee judged the nominated essays and came to a consensus on the 2015 award recipient.

Beth McPheron was one of more than 40 parents nominated for this year’s award.

Students nominate their parents by writing a letter and then submitting it to a committee of UofL staff for consideration. Each nominee received a small plaque and a rolled scroll that included his or her child's nomination letter. Assistant Provost Angela Taylor read excerpts from some of the letters that highlighted parents’ accomplishments.

In his letter, Drew McPheron stated that Beth had been instrumental in helping him overcome adversity so he could attend and succeed in college. Beth had done everything from attend class with him to staying late in the afternoon so that her son could work on group projects.

My mother Beth McPheron should be parent of the year because she is amazing and this is the last year for me to nominate her because I am a senior. The fact that she is amazing is not just the fact that she is my personal care attendant due to my disability, but that she has come to school with me for the last five and a half years. I have Duchenne Muscular Dystrophy that affects my muscles and forced me into a power wheelchair. In order to succeed in school my mom has had to do many things. She has had to basically become my arms and legs because I can't move them. Not being able to move my body can be frustrating, but she does a good job of helping me physically and consoling me at the same time.

In order to make sure we make it to school on time every day she has to wake me up, get me dressed, feed me, and drive me to school. Then when we get to school she has to sit in class and take notes no matter how boring or incomprehensible. It is especially hard for her because I am in Computer Engineering and Computer Science. Due to this my mom has had to memorize symbols she doesn't know in order to know what to write when both it is written on the board or I dictate to her. She does however, get a break when I have to study in peace in quiet. Besides driving me to school my mom also has had to drive me to work during the summers for my co-ops for Speed School of Engineering. While I was at work she would arrange even my own doctor's appointments and hospitalizations.

See photos from the 2015 Parent of the Year Program