In 2011 Louisville Metro Department of Economic Growth and Innovation was awarded an EPA Brownfields Assessment Grant. As part of this grant, the Center for Environmental Policy and Management (CEPM) received a sub-award to assist in the development of an area-wide plan for the 18th Street commercial corridor in Louisville, Kentucky. The goal of the planning process is to identify priority sites for environmental assessment, consider future end-uses for brownfield properties within the commercial corridor, and make recommendations to enhance the corridor's connectivity, mobility, and accessibility. The study area is a two-block depth along 18th Street from Broadway to Algonquin Pkwy. This corridor is also the home of the former Black Leaf Chemical Site, identified for Superfund clean-up in 2011 by the U.S. Environmental Protection Agency. 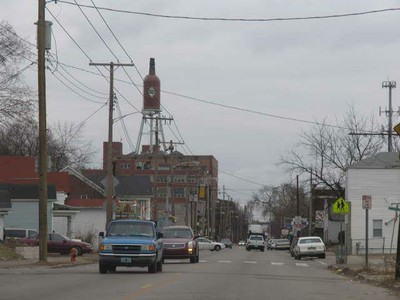 The first public meeting was held on March 15th at the California Community Center with 40 people in attendance.  After a brief introduction from Theresa Zawacki, Assistant Director with the Louisville Metro Department of Economic Growth and Innovation, George Elkund from Network Center for Community Change (NC3) presented the results of a vacant property study recently completed in the area. Participants were then asked to identify properties of interest and concern in the corridor that they believed should be prioritized for clean up or redevelopment. For the purposes of this meeting, the 18th Street Corridor study area was broken up into four separate areas, each with its own map. Meeting participants had an opportunity to visit each map and identify those properties that were of interest to them and provide information about that property’s ownership, past uses, and what they would like to see it used for in the future. Over 30 properties in the corridor were identified by participants at the meeting.

A second public meeting was held on April 5 at the California Community Center with 33 people in attendance.  The meeting was co-led by Lauren Heberle, CEPM's director, and Theresa Zawacki. The meeting included an in depth discussion, along with Q&A, about Louisville Metro’s Brownfield Program, particularly the differences between petroleum and hazardous substance sites.  Meeting participants asked questions and identified several additional properties of interest or concern in the study area.

The project facilitation team has taken the information gathered from the public meetings and incorporated it into a report with recommendations for revitalizing the 18th Street Corridor study area.  We encourage the community to continue to identify, via email or Facebook post, any properties of interest or concern even though the report has been completed. This report does not constitute an official "plan".