Throughout the year, the Women's Center may host other events on the issue of human trafficking.

Join us for the screening of Among the Hidden, a short film focusing on human trafficking, a Survivor's Panel and the premiere showing of Project STARR (Survivors of Trafficking Creating Art, Advocacy, and Resilience) Photovoice Digital Art Display. Thursday, November 15, 2019 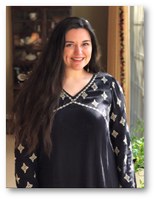 Abigail Helm is a Screenwriter/ Unit Production Manager from Louisville, KY. She’s currently studying Film at Columbia College Chicago, where she’s written and produced multiple short films. In 2017, she executive produced and directed her first self-written short film, Among The Hidden. Her previous production jobs include Production Assistant for My Next Guest Needs No Introduction with David Letterman (Radical Media) and Line Producing for the independent film Let Go (Watercolour LLC). Abigail was also recently an intern for the American Pavilion at the Cannes International Film Festival, where they showed the short film A Portrait of Love Lost, for which Abigail was the Unit Production Manager. This Spring, Abigail will be interning for Beacon Pictures in Los Angeles, CA while she finishes her final semester of school.

Project STAAR's (Survivors of Trafficking Creating Art, Advocacy, and Resilience) Photovoice Digital Art Display. This project seeks to increase awareness of the issue of human trafficking in order to reduce stigma and promote resilience amongst victims of sex trafficking in the Louisville community. Funded and Supported by the Kent School of Social Work Human Trafficking Research Initiative and The Cooperative Consortium for Transdisciplinary Social Justice Research.