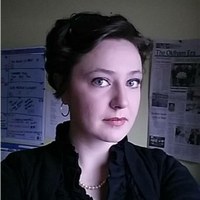 The U.S. Student Fulbright Program, a federally sponsored international, educational and cultural exchange, recognizes academic merit and leadership potential. The program promotes mutual understanding between U.S. residents and people in more than 155 countries worldwide. Fulbrights are among the most prestigious awards in higher education.

“I'm grateful for every opportunity I've had, this one included, to strengthen my reporting chops through real-world practice. But what I'm most excited about with this program is finally slowing down long enough to examine the theory underpinning the practice.”

“As editor of the student newspaper, The Louisville Cardinal, Hodge worked with Professor Ralph Merkel, College of Arts and Sciences. She says: “I was equipped with rudimentary training and whatever tools I could scavenge, dashing from subject to subject, learning as I went and trying not to hurt anyone. Most of my articles would have ended up looking like Frankenstein's monster, were it not for Saint Merkel. He truly embodies the innovative, D.I.Y. spirit that has U of L’s Arts and Science faculty has come to be known for.”