The Guy Stevenson Award for Excellence in Graduate Studies 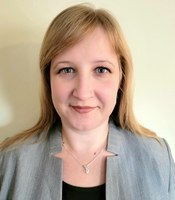 The Guy Stevenson Award for Excellence in Graduate Studies honors a former dean of the Graduate School and is presented to an outstanding doctoral degree recipient who has demonstrated excellence in both scholarship and leadership within the discipline, and has made significant contributions to teaching and/or service.  Irina Vanzhula is the recipient of this year’s Stevenson award and as such, serves as the Graduate School’s outstanding student and will deliver a speech for the Hooding and Commencement ceremonies.

Irina Vanzhula has demonstrated exceptional skills and productivity throughout her time in the doctoral program in Clinical Psychology in the Department of Psychological and Brain Sciences. Irina came to the United States to study psychology following a career as a journalist in her native St. Petersburg, Russia. Her first degree was in journalism, and she participated in a study abroad program as an undergraduate student at the University of Northern Iowa. She later permanently moved to the U.S. and obtained a second undergraduate degree in Psychology at the University of Illinois, receiving top awards for student research creativity. She was funded as a University Fellow at the University of Louisville and maintained a 4.0 GPA throughout her doctoral studies. Her research has integrated the study of mindfulness into the study of eating disorders, work which combines her clinical training and experience in mindfulness, under the supervision of Dr. Paul Salmon, with her clinical training and experience in eating disorder and cognitive behavior therapy interventions, under the supervision of Dr. Cheri Levinson. This integrative approach led her to develop an ambitious and novel dissertation project that was a randomized intervention study.  This study is cutting edge and high-impact with important implications for public health, and it will be of great interest in the field of clinical psychology. This work is currently being prepared for publication.

Irina’s ability to focus, her considerable writing skills and high level of organization have led to a high level of research productivity. She has expertise in complex statistical methods and has co-authored 23 peer reviewed journal articles.  Irina completed a highly competitive predoctoral internship program at the University of Chicago School of Medicine, and she has been hired as a post-doctoral fellow in a prestigious eating disorder program at Johns Hopkins University. She is clearly an emerging leader in the field of eating disorders and clinical psychology at the national and international level.

Victory Osezua is the recipient of the John Richard Binford Memorial Award, which honors a former chairman of the Department of Psychology. This award recognizes a doctoral degree recipient who excels in scholarship and has contributed to other areas within the discipline such as leadership, teaching, or service.

Victory Osezua is a PhD candidate at the Health Promotion and Behavioral Sciences department in the School of Public Health and Information Sciences. She also received a Master of Public Health degree from University of Louisville and has a Bachelor of Science degree in Biochemistry from Covenant University, Nigeria. During her time at the University of Louisville, she exhibited excellence in academics, research, teaching, and service.

As an educator, Victory embraced the Health Promotion and Behavioral Sciences Department’s goal of strengthening students’ understanding of health equity and social justice. She mentored students on navigating their academic paths to expand their knowledge, pursue their passion and discover their purpose regardless of their backgrounds. She is passionate about teaching and has served as a teaching assistant and co-instructor for both undergraduate and graduate courses in the University of Louisville.

Victory’s research explores inequities that affect the well-being of underserved youth using qualitative and quantitative research methods. Her research focuses on social injustices, structural racism, post-secondary success, and HIV risks. Her research also examines the risk and protective factors of racial and ethnic minority groups’ health from an ecological lens to promote public health prevention efforts. Her study with refugee and immigrant populations identified social exclusion as a significant barrier to post-secondary educational attainment for young African refugees. The findings from this study led to her dissertation study titled “Understanding the Meaning of Wellbeing in the African Great Lakes Region’s Refugee Youth in Louisville, Kentucky.” Through mentorship from University of Louisville faculty, Victory has published research papers in several peer-reviewed scientific journals.

Beyond the classroom, Victory is active in campus programs and serves on panels that promote equity, inclusion, and student success. She served as the president of the Multicultural Association of Graduate Students to advocate for graduate students who are ethnic/racial minorities at the University of Louisville.

Victory also volunteers with the West Louisville Outdoor Recreation Initiative to address systemic barriers that prevent African American children from spending time in nature. Additionally, Victory serves as the Secretary of the Lead to Empower Initiative, a refugee and immigrant community organization that promotes leadership and empowerment of young immigrants who are racial and ethnic minorities. Over the years, Victory’s demonstrated excellence in scholarship and leadership within the field of public health has been awarded with special recognition within and outside the University of Louisville.

Brett Janis is the winner of the John M. Houchens Prize, which honors a former registrar of the university and is awarded to the doctoral student who presents the most meritorious dissertation for the current commencement.

During his Bachelor of Arts in biology, molecular biology, and biochemistry at Cornell College (Mt. Vernon, IA), Brett Janis gained insight into the process of self-driven research and became fascinated with combining organic chemistry and physics principles to approach biological questions, which led him to work with Dr. Michael Menze at Eastern Illinois University (EIU). At EIU, he studied animals that survive desiccation in a phenomenon termed anhydrobiosis. Anhydrobiotic (life without water) animals express a specific class of polypeptides termed intrinsically disordered proteins (IDP). Anhydrobiotic animals become resilient to stress such as extreme temperatures, radiation, or even the vacuum of space. The IDPs Brett studies are termed Late Embryogenesis Abundant (LEA) proteins and occur in the cysts of the brine shrimp Artemia franciscana. The study of life without water poses unique biochemical and biophysical challenges. New ways to perform biochemical research approaches at minimal water contents had to be developed.

Dr. Menze and Brett transferred to the University of Louisville halfway through Brett’s M.S. program, and he started his research as a Ph.D. in biology. Brett believes scientific discovery should be associated with some meaningful social impact whenever possible, so he adapted his research into anhydrobiosis to discover new ways to extend the shelf-life of biomedical materials like human red blood cells without refrigeration. He served as Co-PI on an NIH ExCITE grant, which funded his research into preserving cells for later medical use. This new research project combined his love for material chemistry with a passion for biomedical research and development. He began a fruitful collaboration with Dr. Jonathan Kopecheck at the Speed School of Bioengineering to develop a better way of cell storage through the National Science Foundation Innovation Corps program. Other parts of his work were possible through funding from the Department of Defense, the National Science Foundation, and the National Aeronautics and Space Administration. 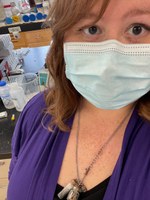 The Alice Eaves Barns Award is named in honor of Mrs. Alice Eaves Barns for her many years of outstanding service as a staff member of the Graduate School.  This award recognizes a student who has displayed tenacity in the face of adversity while attaining excellence in both the classroom and outside endeavors.  The award is given in recognition of outstanding achievement in a master’s program.  Ashley Ezzo is this year’s recipient of the Barns award, and she tells her own story in her words here:

In my hometown poverty, minimum wage, broken families, and limited career opportunities are common. Most opportunities are provided to students of prominent families in the community. My family, along with so many others, were not this fortunate. Therefore, I was primarily responsible for my education and future.

My first experience of (non-familial) genuine care and encouragement was at Eastern Kentucky University (EKU). However, in summer 2016, I was hospitalized for a week at UofL with traumatic injuries after a car wreck. These injuries included thirteen fractured ribs, two knee fractures (coupled with a torn ligament and meniscus), a spine fracture, a hematoma requiring surgery, and a severe concussion (creating short term memory loss and speech deficits). I continued online courses the following semester and physically attended EKU in spring 2017. My drive was to return to EKU, where I first felt autonomous. However, after a year of unemployment (and not receiving disability or unemployment funding), I was in considerable credit card debt and worked three jobs as a full-time student to support myself. Additionally, after multiple failing attempts to maintain a run-down vehicle, I resorted to taking out a loan for a replacement. The added monthly payment forced me to acquire food stamps, a decision I pridefully struggled with because many in my hometown generationally needed food stamps. After graduating with overwhelming personal debt, I moved back home. My independence was gone, resulting in both mental and emotional anguish. I later realized I was happiest in college, and if I wanted to leave the situation I was in, I would have to go back.

Though I was elated to start my master’s degree, my financial situation was still daunting, and I could not move to Louisville. This resulted in an hour commute and working multiple jobs. The following year (2020) I reclaimed my financial situation. However, a month after my final car payment, I was t-boned by an inattentive driver, totaling my vehicle. The hard work of those four years was gone within minutes. Shortly after this event I contracted COVID and was isolated during the holidays. While recovering, I was desperate to have positivity outside of class.

Though many students held off project presentations/submissions in 2020/21 due to the pandemic, I submitted an entry and was granted the Polizer Essay Contest Award through the American Association of Physical Anthropology (AAPA), an uncommon accomplishment for first time entries. Afterwards, I presented a portion of my research at the 2021 AAPA annual meeting with glowing reviews. Then, shortly before graduating, I was hired as a research technologist for the Kentucky Spinal Cord Injury Research Center. Though many within the center view this position as minimal skill level, it’s almost unreachable in my hometown. I never thought someone from my background, let alone me, would have this opportunity. While mental, emotional, physical, and financial struggles have plagued my educational journey, my pride and resilience have always been there to stoke my determination and overcome adversity while achieving my goal to help others.