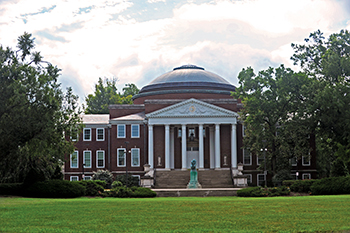 The governance of the University of Louisville is vested in its Board of Trustees, which exercises final jurisdiction over the University in accordance with the statutory authority of the Commonwealth of Kentucky.  The board consists of 16 “competent citizens of Kentucky”, each of whom is appointed by the Governor of Kentucky and serves a six-year term.  In addition, one faculty member, one staff member and one student sit on the board as voting members.

Shared Governance, sometimes also called collegial governance, is an important value at the University of Louisville.  It is a set of principles and practices through which faculty and staff members participate in the important decisions regarding the operation of the university. Collegial governance is a system based on the idea that authority and responsibility are shared among colleagues, some of whom are primarily faculty members, administrators, staff, and students.

The Faculty Senate, Staff Senate and Student Government Association represent their respective constituencies to the administration.  They are responsible for eliciting and expressing opinions, suggestions and recommendations from these constituencies.  To learn more, click on the name of each organization.

Several groups on campus advise the President and University Provost on specific issues.  Examples are the Commission on Diversity and Racial Equality (CODRE), the Commission on the Status of Women (COSW), and Faculty and Staff For Human Rights.

Beyond its central administrative structure each of the University’s 12 degree-granting schools has its own set of policies and procedures, each of which must be consistent with The Redbook.

Office of the Provost

Much of this Handbook is in pdf format. To navigate through a section using its bookmarks, open the pdf with Adobe Acrobat Reader and click on the Bookmarks tab to show the topics and keywords bookmarked.