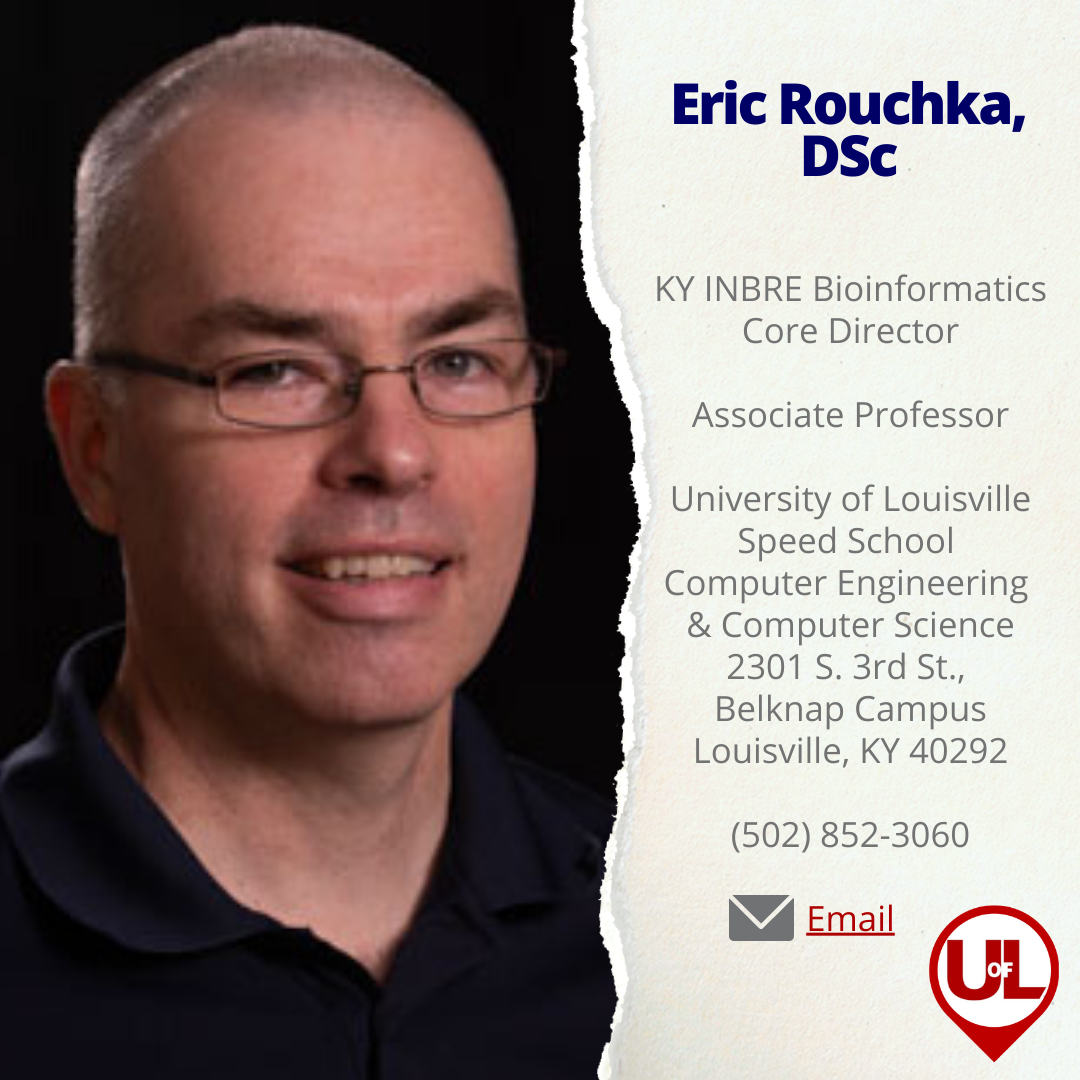 Dr. Rouchka's laboratory is primarily interested in algorithmic development and design for use with high throughput genomic and transcriptomic data. The laboratory has ongoing research in the areas of understanding gene regulation from both a transcriptional and translational point of view as well as in the area of systems biology for understanding cross-tissue signalling through an ongoing collaboration with the Petruska lab. Dr. Rouchka's team also uses publicly available next-generation sequence data for studying genomic variation. 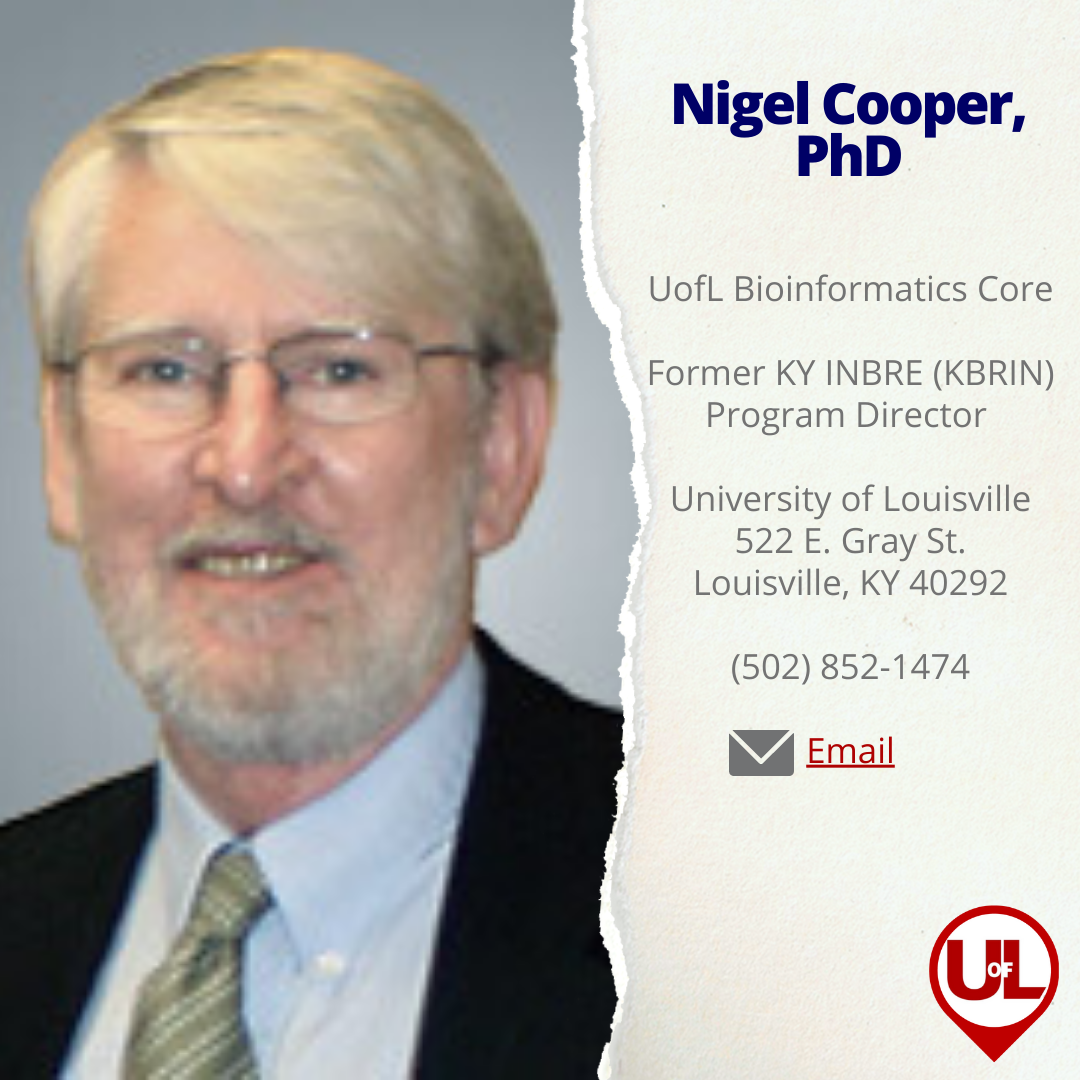 The research interests of Dr. Cooper's laboratory are related to signal transduction and gene networks in neurons. His group is currently funded to investigate cell death and cell survival pathways in animal models of retinal ischemia, and they propose to establish signature events related to this blinding disorder. Discoveries in this field may lead to better therapeutic interventions. The relationship between the expressions of miRs and mRNAs is one area under investigation. The laboratory's interests in bioinformatics include the potential for biomarker discovery as well as for the development of tools, resources, and other infrastructures for life sciences research. The promise of bioinformatics is that it will allow an investigator to reach beyond his/her own computational capacity to access and integrate multiple and disparate sources of information and to manage the complexities of scale inherent in genomic, molecular, cellular, and organismal systems. 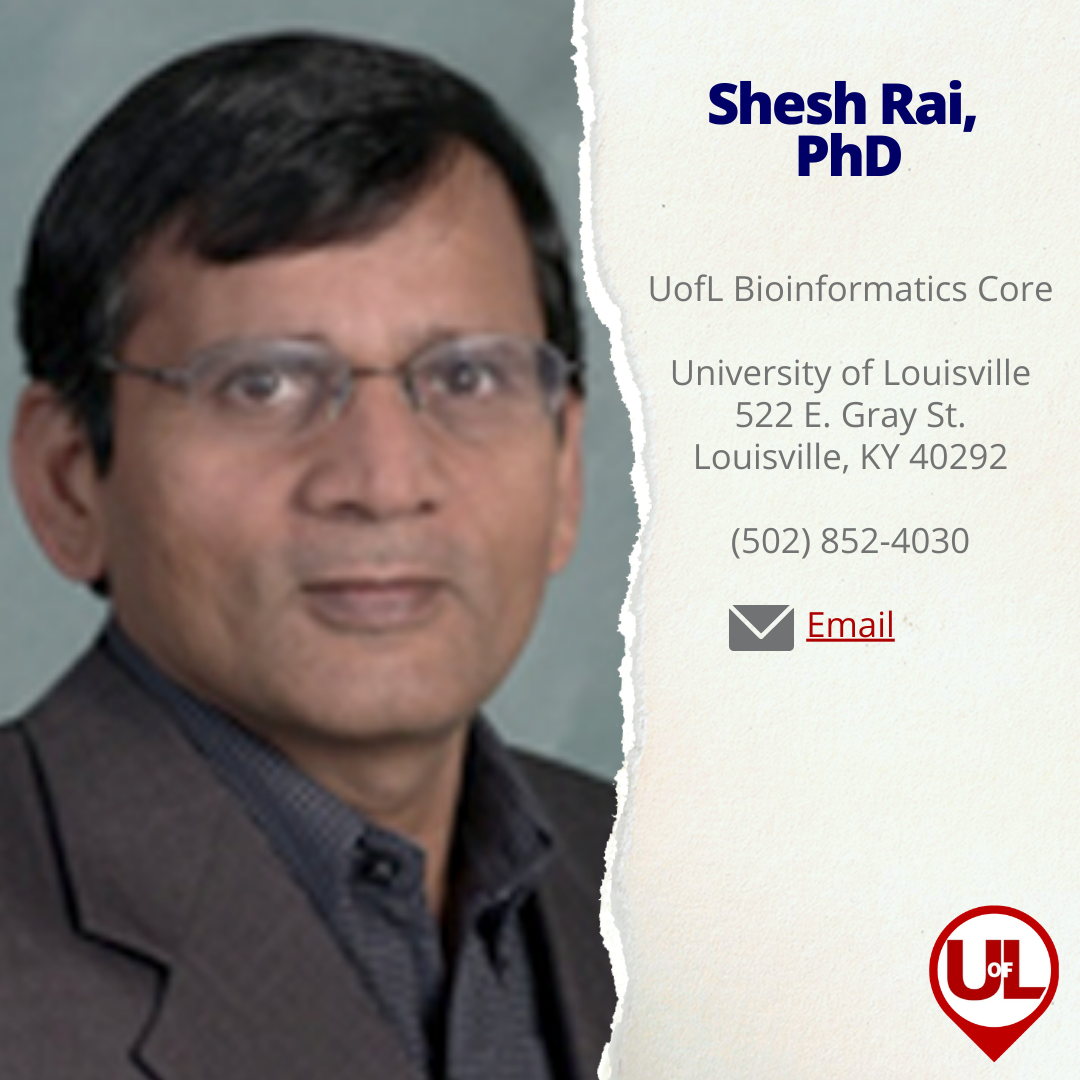 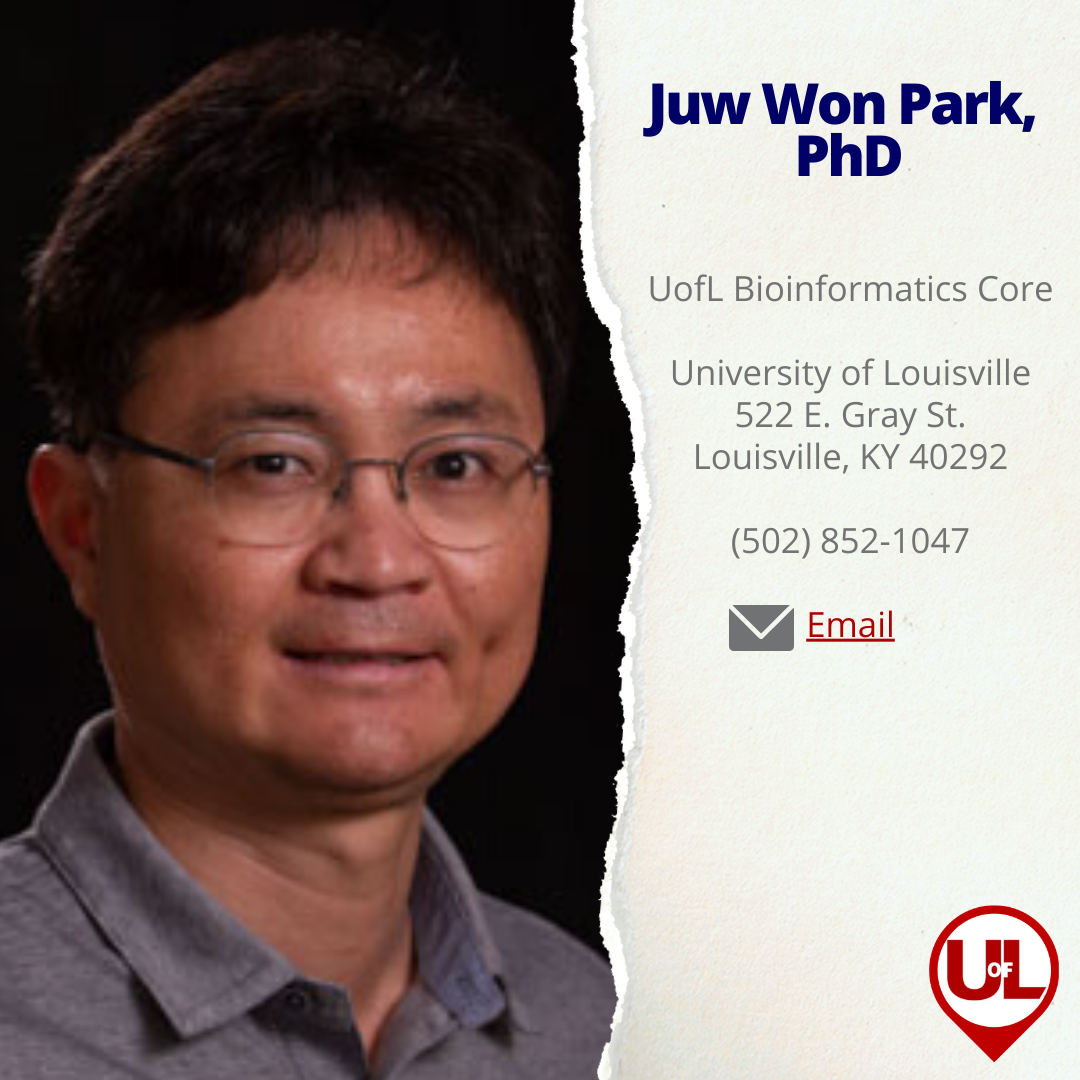 Dr. Park's research interest is in bioinformatics and computational genomics. Bioinformatics is, by nature, interdisciplinary. It combines computational and biological research together to answer important biological questions, including how diseases like cancer develop. His research focuses on the analysis of alternative mRNA splicing and its regulation in eukaryotic cells using high-throughput RNA sequencing (RNA-seq) and related genomic technologies, including their applications in biology. He also develops novel computational and statistical methods for analysis of massive genome and transcriptome data. 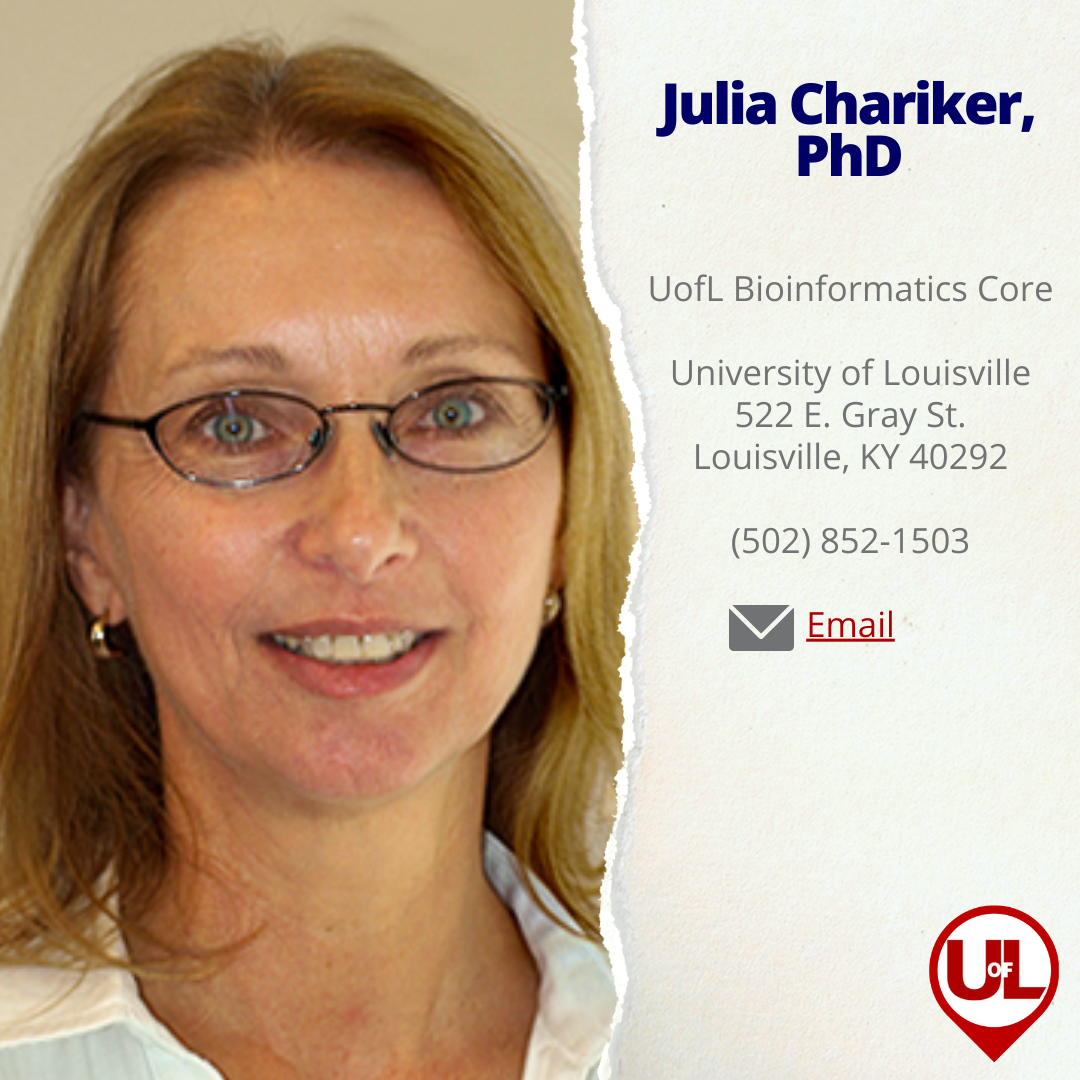 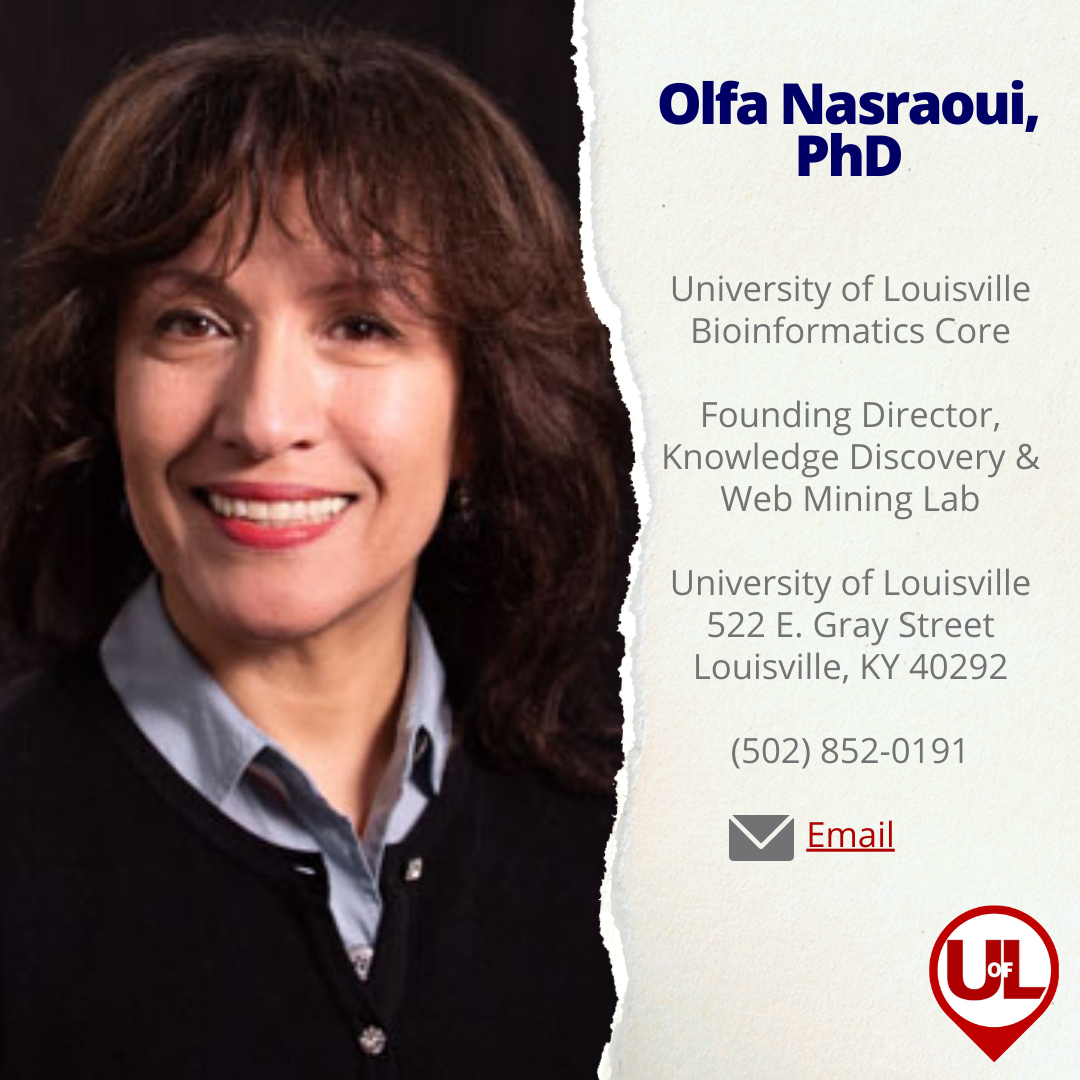 Dr. Nasraoui's research activities and interests include Machine Learning and Data Mining, Web mining, Information Retrieval, and Data Science, and their applications to solve challenging real world interdisciplinary Big Data and Explainable AI problems. Her research has been funded mainly by the US NSF and by NASA. 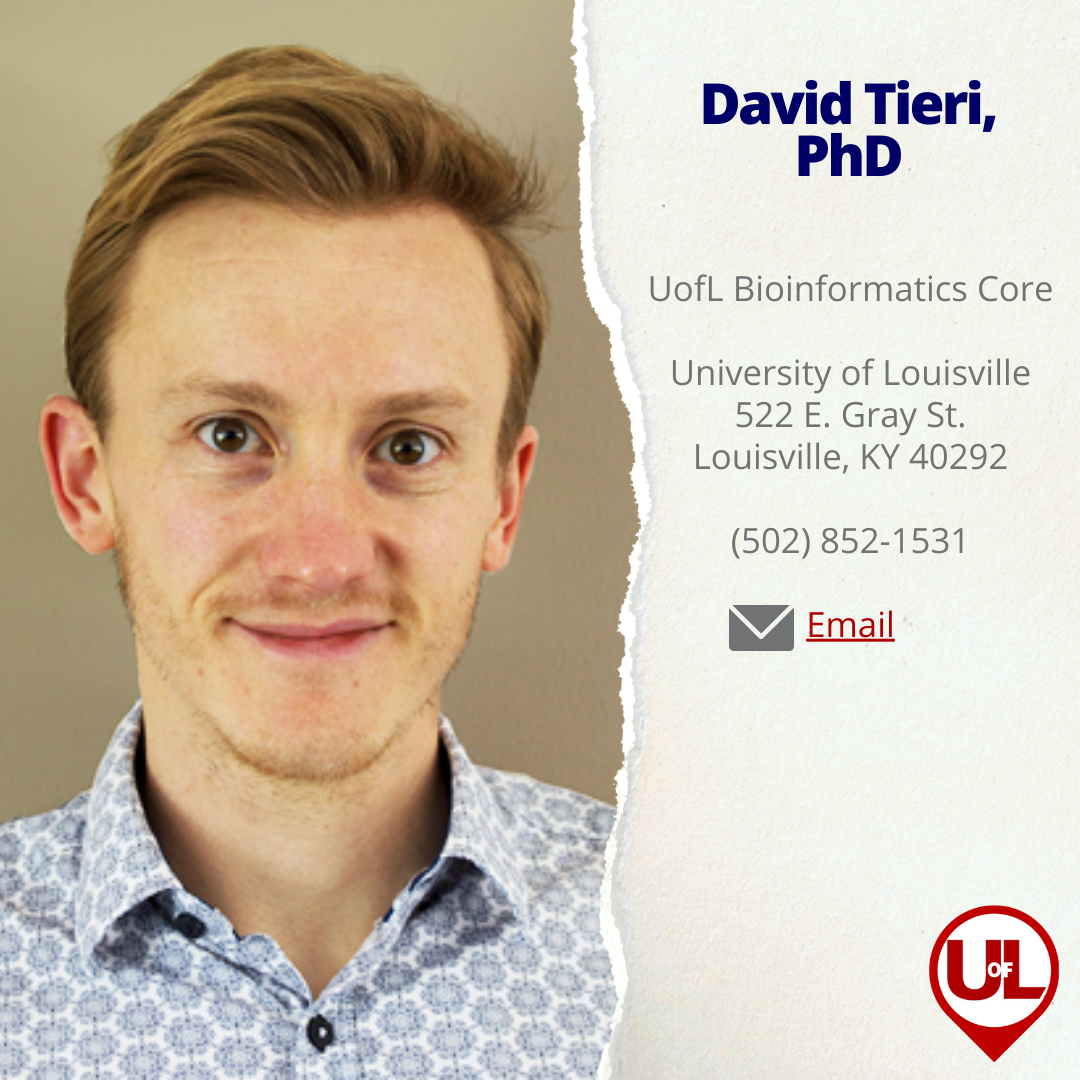 My research involves the development of hidden Markov Models which identify DNA and RNA sequences that have the potential to form g4 quadruplex structures. These structures play a key role in gene regulation of wide range of biological processes, including the regulation of telomerase. Telomerase is responsible for the lengthening of telomeres which allows for cell immortality, and is significantly upregulated in the majority of human cancers. This, along with the fact that g4 quadruplex structures show a rich structural diversity, allowing for a high degree of selectivity, suggests that they are promising therapeutic targets in oncology. 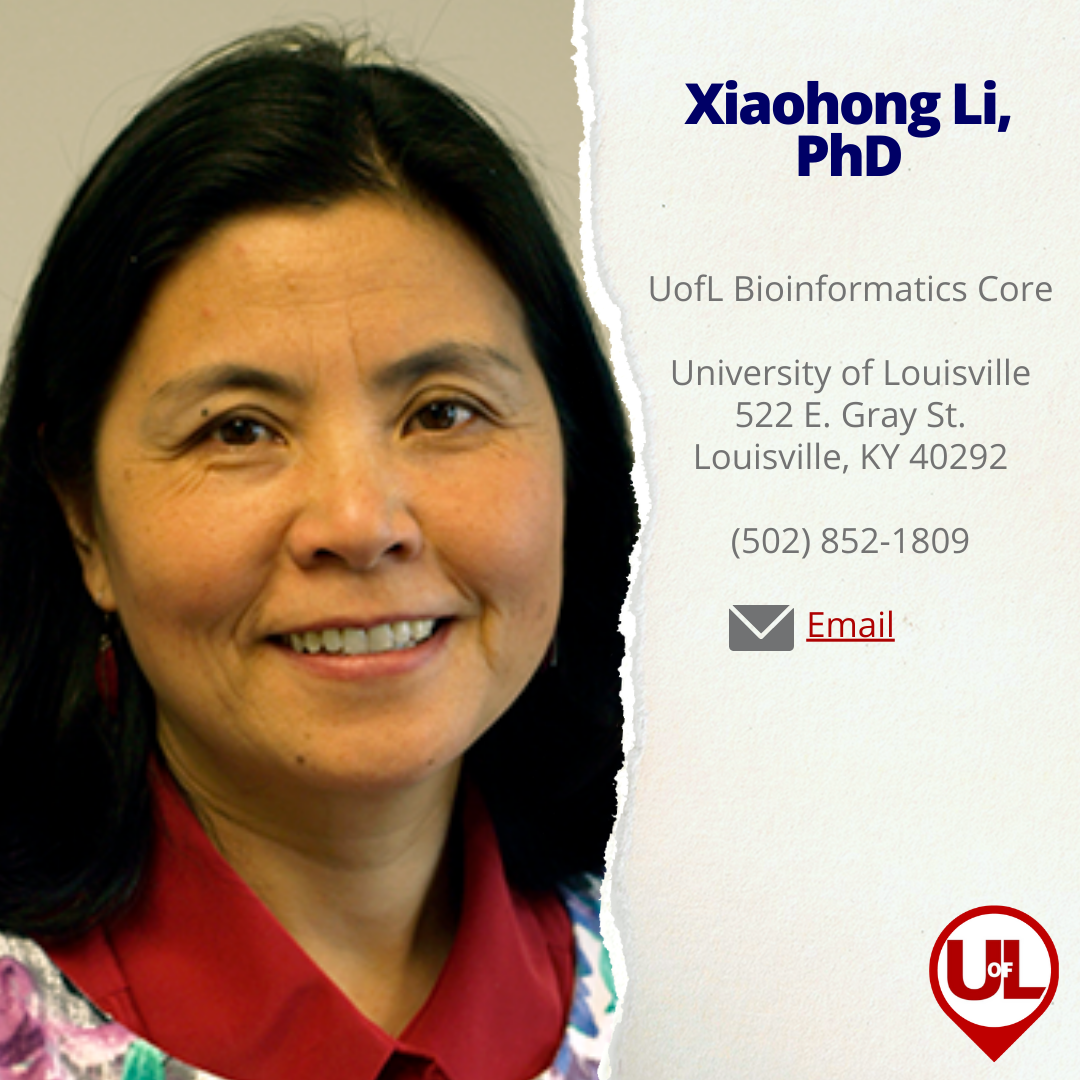 Dr. Li’s primary interest is the application of statistical methods in genomic research. As part of her Ph.D. dissertation, she developed new normalization methods for high throughput RNA-seq data analysis and sample size calculation methods for designing RNA-seq experiment. She is experienced in the analysis of cDNA microarray, RNA-seq, DNA-seq,16S-seq and related pathway, and is an IPA certified analyst. 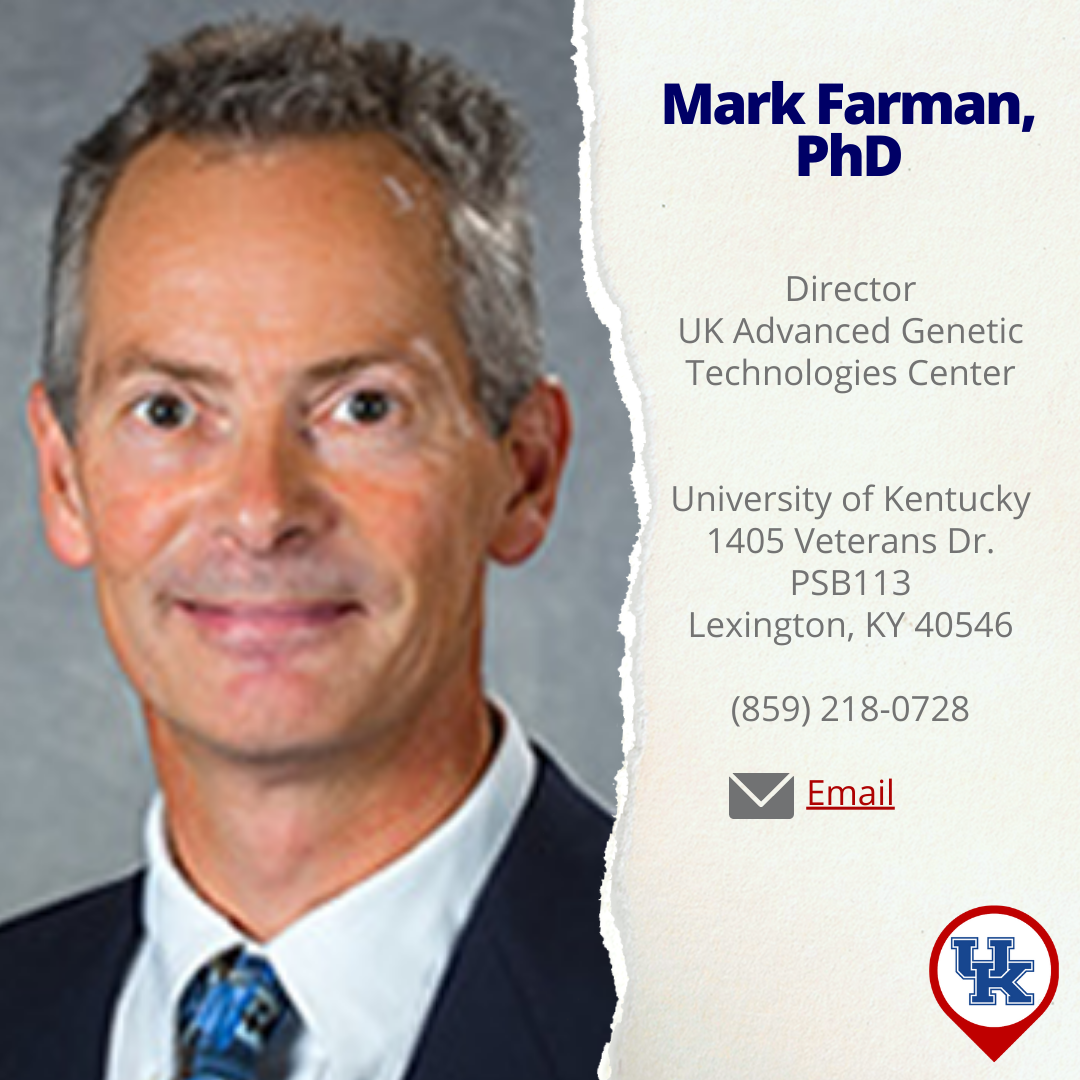 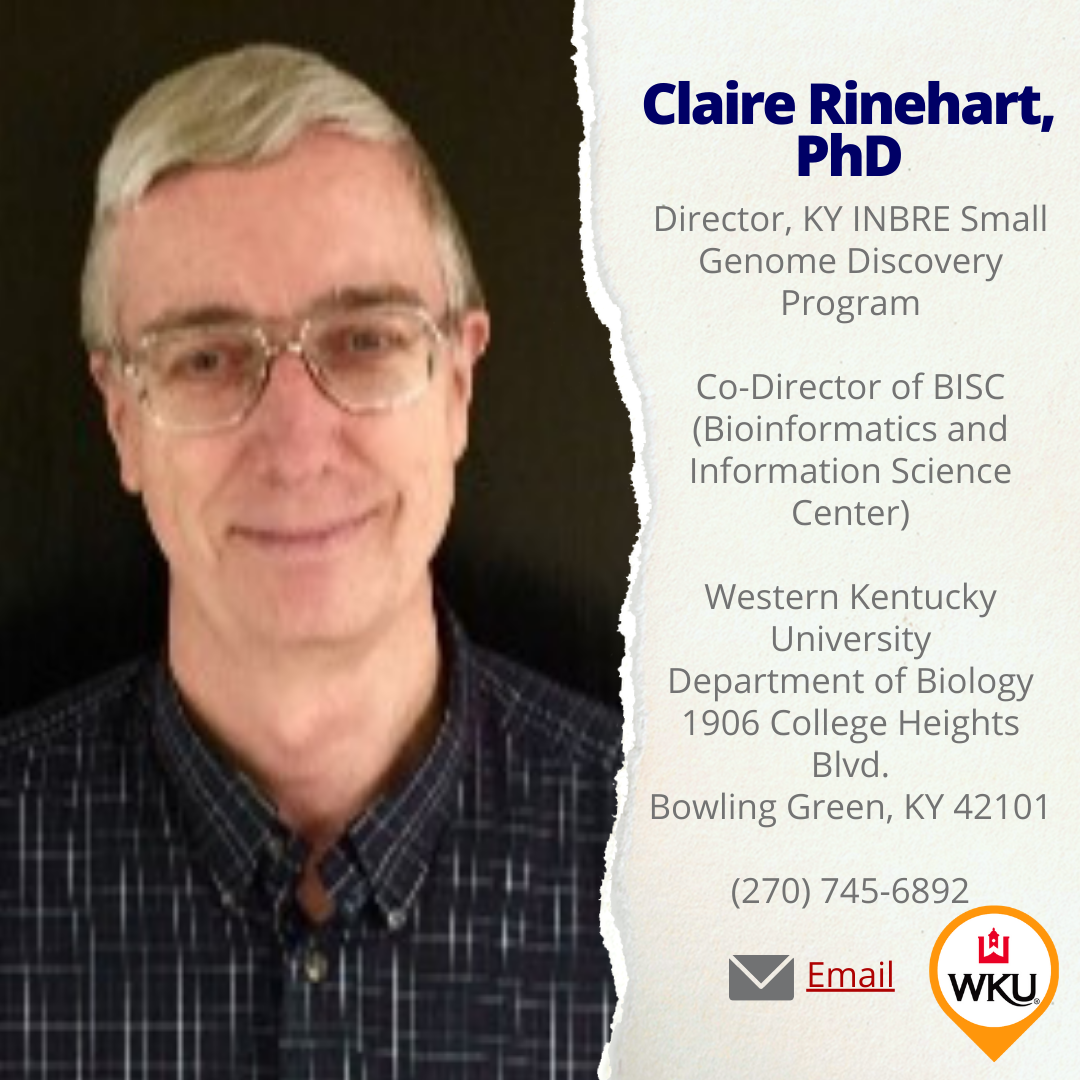 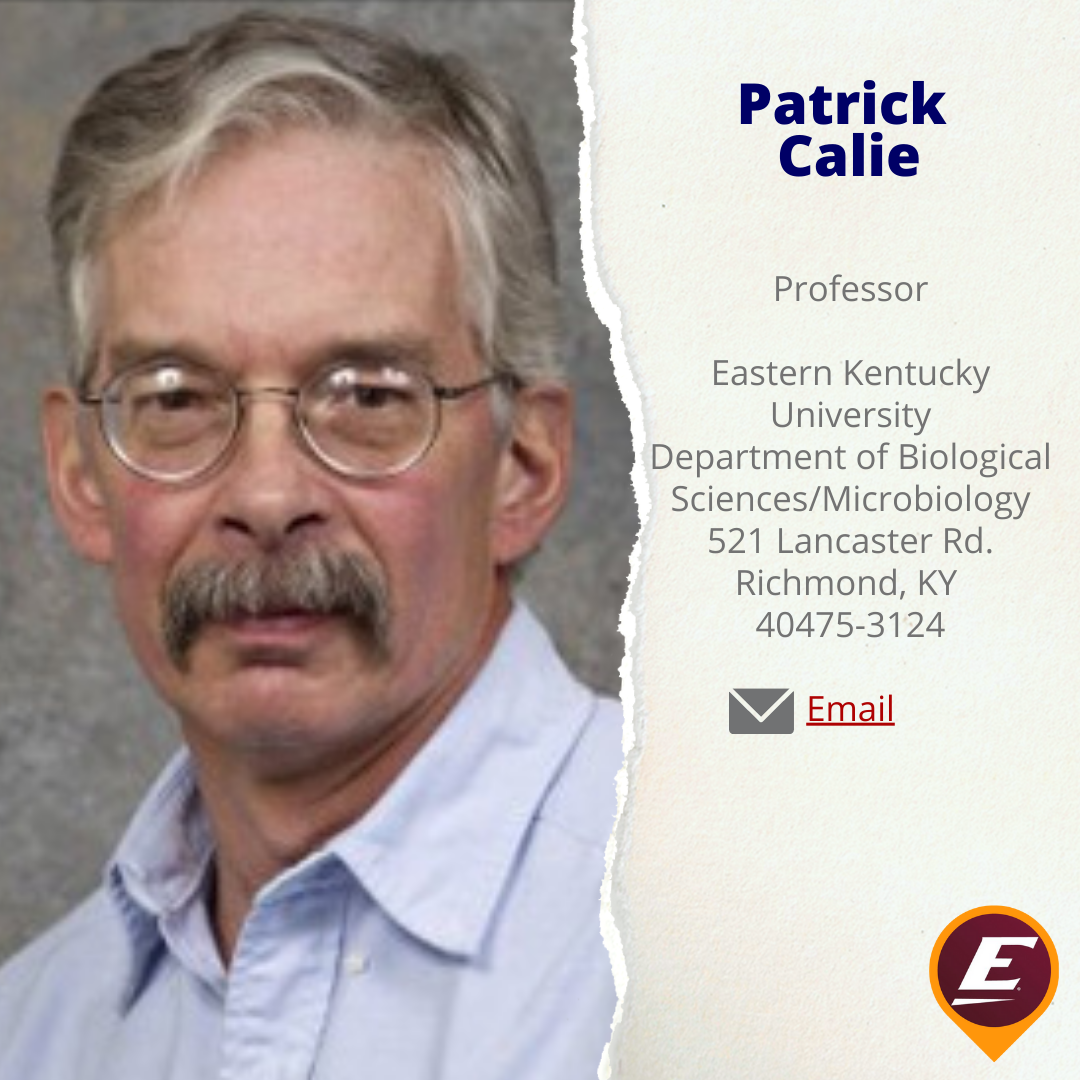 Dr. Calie's current research efforts are in two areas: flowering plant and fungal phylogenetics, using either sets of individual genes or entire genomes, and fungal genomics. In the first venue he is focusing on the evolutionary history of the genera Rhyncospora (Cyperaceae) and Arisaema (Araceae), and the members of the family Sarraceniaceae, the pitcher plant family. For this effort r. Calie's collaborators and I are using both coding and non-coding regions of the nuclear, plastid, and mitochondrial genomes for informative data sets to facilitate the construction of testable hypothesis regarding current relationships and likely evolutionary histories. In the genomics efforts, he is collaborating with colleagues (Drs. Chris Schardl, Rudy Yoshida, and Jerzy Jaromcyk) at the University of Kentucky in determining the information (gene) content of select members of the fungal ascomycete family Clavicipitaceae. The efforts are now focused on the origin and evolution of genes that allow for the production of novel alkaloid compounds, on determining the origins of several hybrid fungal taxa, and on the development of appropriate statistical and computational tools to allow for the use of entire genome sequences as data sets for phylogenetic reconstruction.