By Sandra Hammers and Whitney Logsdon 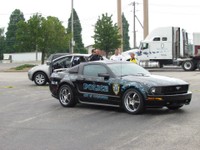 Owensboro Autism Network, Inc. is a newly founded support group based in Owensboro, Ky. Monthly support meetings and family events are held throughout the year. More recently, OAN hosted a Family Safety Awareness Day on July 12. At this event, all local emergency responders, Smart 911, CPR, bike helmet safety, car seat checks, Child Safety Kit, Owensboro Balloon Twisters and Owensboro Inflatable all came to support and share information with the families. This event was a huge success as our first public event, raising $143.00 to go towards the application fee for filing for our non-profit status. Please visit the new website at owensboroautismnetwork.org and like us on Facebook, www.facebook.com/OwensboroAutismNetwork! 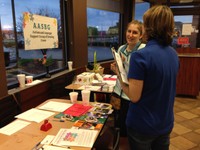 Bowling Green is like a lot of small cities with a good amount of services for families living with autism, but no central avenue for families to navigate those resources. Bowling Green has a population of about 65,000 people. Our educational co-op (GRECC) is located here, and we also have Lifeskills which facilitates many services including Michelle P. waiver and First Steps for a 10 county area. We are also a college town with Western Kentucky University up on the hill. We have additional programs available through WKU as well.

While we have a number of amazing resources, most agencies have functioned in isolation over the years. While schools and providers work with many of the same children, there has been little collaboration to help kids reach their goals.

Last fall, under the leadership of Amy Cooper-Puckett, the state asked for an Autism Task Force to be formed, and Bowling Green was chosen as a site for one of the groups to meet and assess local resources.

I help to provide leadership to our local parent support group (the Autism & Asperger Support Group of Bowling Green, AASBG) along with Dr. Elizabeth Sternberg, a pediatrician who is also an ADOS Evaluator connected to Graves Gilbert Clinic. We were both asked to join the task force, and we were delighted to see folks from Lifeskills, GRECC, CLiK, First Steps and WKU’s Clinical Education Complex willing to collaborate and eager to help problem solve for the growing number of children with autism in our community.

As we researched, like others across the state, we found gaps in services. A glaring problem we found was a lack of screening services. Most pediatricians are not doing autism specific screenings at well-child visits. Despite many other issues that came up, we felt that as a task force, we could plan a screener event where kids could come and get screened by professionals. This event was our attempt to bridge one of the many gaps we saw in local resources.

At that point, we brought in Lisa Murphy, Vicki Beach and Ericka Orndorff from WKU’s Renshaw Early Childhood Center, who had more experience doing this type of event. Our local Chick-fil-A was willing to let us take over one of their family nights in April during Autism Awareness Month. Several WKU students planned crafts and activities for kids who came, similar to those done on other family nights, and we had some local businesses donate door prizes for a drawing that parents who completed a screener could enter. Between WKU’s ECC and Sandy Hackbarth from Lifeskills, the screeners were made available. We used the PDDST-I and had a few MCHAT’s available for older children who came. We advertised we would screen children age 12 mths to five years old. Representatives from First Steps were on hand to answer questions for children in the birth to three age range.

We called the event “Autism Family Night” and we were delighted with the turn-out. Our professionals completed 27 screeners, and 23 of those children were referred for further testing. As families came in the door, they were looking for us. Many of them said they knew something was going on with their child, and hoped completing a screener would help them know if an autism spectrum disorder could be a factor. Our five professional screeners were busy screening and talking with families throughout the duration of the event.

While it is sad to see families go through the process of discovering their child has an ASD, it is also a relief to know that many of these kids would go on to get much needed help and support that they otherwise would not have gotten. Getting the kids and families connected allows them to navigate the still confusing and sometimes disconnected resources available. We can honestly say that in Bowling Green, we are a bit more connected now than we were a year ago, and we are so thankful.