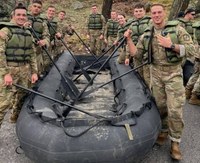 Great job, Cadets.  The University of Louisville and the Army ROTC program are Proud.