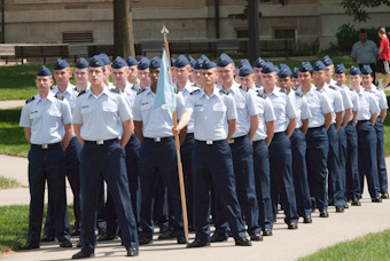 Air Force ROTC is a college program offered at more than 1,100 colleges and universities across the U.S. It prepares you to become an Air Force Officer while earning a college degree. And it gives you the opportunity to get the tuition money you need. But more than that—it’s a challenge, a head start on a lifetime of success, within the Air Force and in everything you choose to do.

In Air Force ROTC, you’ll make the most of your college experience. You’ll hone your time-management skills, analytical skills and physical fitness. It won’t be easy. But if you’re up to the challenge, the rewards will last a lifetime.

Air Force Reserve Officer Training Corps Detachment 295 was activated in 1949 under the command of Major Hugh J. Ray.  Headquartered in Patterson Hall, the ROTC unit established itself as a campus fixture.  The first class of new Air Force officers graduated in 1953 under the command of Col. I. B. Anderson.  Since the first commissioning ceremony, the unit has always had students enrolled in the program.  Under the guidance of it’s commanders, the detachment has expanded to include students from all Metroversity schools.  In 1978, the detachment moved from Patterson Hall into the Naval Science Building.  In 1981, the building was rededicated in honor of retired Air Force General Russell E. Dougherty, the former commander-in-chief of the Strategic Air Command and a 1948 University of Louisville Law School graduate.  The detachment continues to produce dedicated Air Force officers, keeping the tradition of education and service alive and well.

Construction of the hall began in 1945 and was completed in 1947. It first entered service as the Naval Sciences building, home to a Naval ROTC unit. Throughout the years, it has also served not only as a center for the Military Sciences, but also as a home to the Student Union and the Math Department. It was renamed on 15 May 1981 in honor of General Russell E. Dougherty (USAF, Ret.) Currently, Air Force ROTC Detachment 295 and Army ROTC Cardinal Battalion are co-based in Dougherty Hall.