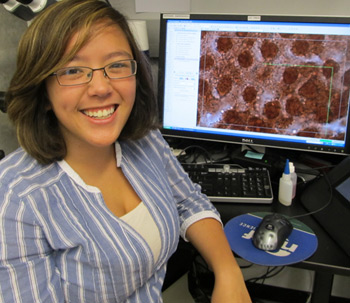 Amy Ashworth, a senior inbiological sciences at Northern Kentucky University (NKU) was recognized for her work related to quantifying the levels of CYP1A1 and CYP1A2 metabolic enzymes in different parts of the brain in mice. While the enzymes are best known for their function in the liver, other research has reported that both are expressed in the brain as well, although their function has not been determined.

Amy has worked for three years in the laboratory of Dr. Christine Curran, whose prior research found increased levels of messenger RNA for CYP1A1 in the brains of mice exposed to PCBs. Amy has been following up those findings by comparing activity of CYP1A1 in the cortex and cerebellum. Her work required extensive methods development, an unusual undertaking for an undergraduate student, and she was aided by researchers at the University of Cincinnati as well as Dr. David Thompson of NKU. In addition, Amy worked on a collaboration with Dr. Nigel Cooper (University of Louisville) and Dr. Mark Bardgett (NKU Psychology) looking at behavioral differences in substrains of C57BL/6 mice.

Graduating in May, Amy is hoping to pursue an MD-PhD program in neuroscience or neurotoxicology. Dr. Curran says she will “definitely miss her energy, enthusiasm and scientific excellence!” Congratulations, Amy!