$45 for 45 Years — the Department of Pan-African Studies was launched at UofL in 1973, making it one of the oldest units of its kind in the country. In honor of our 45th Anniversary, we are asking you to give $45 to help us continue our model undergraduate and graduate programs.

Welcome from the Chair of Pan-African Studies 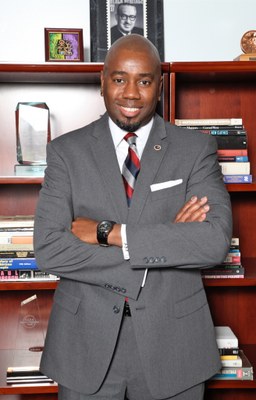 In honor of the Department of Pan-African Studies’ (PAS) 45th Anniversary, we are asking you to join in our $45 for 45 Years Campaign.

We hope all alums, friends, and supporters will see fit to GIVE AT LEAST $45 to PAS. You can certainly donate more (like $4,500 if you have the means) – just make sure 45 is in the amount somewhere: $145, $450, $1,045, $45,000. It all works!  Please support us in continuing the important work we do for another 45 years during these increasingly difficult financial times. Thank you in advance for your love!

Why should you give? Here’s why!

The Department of Pan-African Studies at the University of Louisville is the “Mothership of the Midwest” (and parts of the South). By visiting this site, you are displaying interest, for one reason or another, in a department that has been repeatedly evaluated as one of the strongest of its kind. The first Black Studies department was established 50 years ago in 1968 at San Francisco State University. Five years later in 1973, PAS was launched at UofL - making it one of the oldest units of its kind in the country.

Not only does PAS have a model undergraduate program with an impressive catalog of course offerings, we are also a leader in graduate education. PAS has offered the M.A. since the turn of the century and admitted our first class of Ph.D. students in 2012. We are one of seventeen Black Studies masters programs in the country, one of only twelve offering the Ph.D., and have the distinction of being the first Black Studies doctoral program in the South. PAS is an also innovator in on-line education. Our long-standing and thriving distance learning initiative, PAS Cyber, has the capacity to reach students from Kentucky to Kenya and all points between and beyond. Launched in 2004, PAS Cyber is another example of how we remain on the cutting-edge of education and technology.

PAS currently has a compliment of 11 full-time faculty members, numerous associated faculty, and Cyber instructors who comprise the PAS Family. We are one of the most multidisciplinary departments in the country and house scholars specializing in: African American History, Anthropology, Art History, Caribbean Studies, Continental African History, Ethnomusicology, Gender and Sexuality, Linguistics, Literature, Political Science, Religion, Social Work, and Sociology. Various media platforms have featured current PAS faculty members, including: the New York Times, Washington Post, Associated Press, Reuters, CNN, Fox News, BBC, Canadian Broadcast Corporation, Christian Science Monitor, HBO, NPR, E! Entertainment, Travel Channel, Huffington Post, and many others. So, it should be clear that we not only have quantity, but incredible quality in our ranks.

Our department has served as the home for a number of important scholars and professionals. PAS was the home department of the late Dr. James Blaine Hudson, the first African American Dean of the University of Louisville’s College of Arts & Sciences. The Honorable Brian Edwards was a PAS faculty member when he was appointed to the bench by Governor Steve Beshear, making him one of only three black circuit court judges in Kentucky. PAS was also the last academic stop for the legendary scholar, poet, and administrator Professor Jan Carew. We also have one of the most successful study abroad opportunities at UofL with our annual excursion to Trinidad and Tobago and houses the University of Louisville’s award-winning Malcolm X Debate Society.

PAS features a number of faculty members who reach far beyond the classroom and maintain real-world campus-community connections. Have you heard Dr. Brandon McCormack preach around town? He’s great! Have you listened to Dr. Kaila Story’s podcast, Strange Fruit, from NPR or The Ricky Jones Show from iHeart Media? You should! Both are award-winning . . . and fun!

As you can see, the Department of Pan-African Studies has sat at the heart of progressive ideology, academic excellence and social responsibility throughout the state, country, and abroad for 45 years. PAS graduates have gone on to become professors, lawyers, researchers, administrators, business leaders and even collegiate basketball coaches. We have delivered stellar tribunes in many fields of human endeavor for almost a half-century and will groom many more in the years to come.

So, whether you are interested in our bachelor’s degree, seeking to join the elite ranks of doctoral students from PAS, want to sit in on a class, would love to connect with one of our fabulous faculty members, or desire to learn a little about making the world more humane, welcome to one of the best places to get the job done!