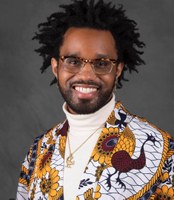 Byron Terry (he/they) is the Assistant Director, for the LGBT Center on the Belknap Campus. Originally from Paducah, KY, Byron earned BA in Psychology and Communication from the University of Louisville. During his time as an undergrad Byron served as President of the National Association of Black Journalists and was a member of the Phi Eta chapter of Omega Psi Phi. Byron continued his education by earning Masters degrees in Urban Studies and Clinical Mental Health Counseling from Northeastern Illinois. Byron has previous higher education experience working as the Diversity Coordinator at Governors State University and a Student Support Counselor at The Chicago School of professional Psychology, where he coached and mentored students, provided crisis referrals, designed and facilitated trainings, directed large-scale events, organized a food pantry, and advised student groups such as the Black Student Union and LGBTQ+ Registered Student Organizations (RSOs). Additionally, Byron served as a Mayoral Fellow for Chicago Mayor, Lori Lightfoot; AmeriCorps Vista with the Illinois Campus Compact Program; practicum intern with the Anti-Violence Project; and a volunteer for the Center on Halstead, Chicago’s LGBTQ+ center.

You can reach Byron by email, here. 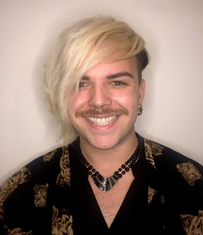 Goldie (they/them) works for the LGBT Center on the Belknap Campus. A graduate of the University of Louisville, Goldie received their Bachelor’s degree in Music, with a minor in Mathematics. Goldie comes to the LGBT Center after spending five years providing advocacy and support to survivors of intimate partner and sexual violence. Noticing a need for knowledge and skills in working with LGBTQ+ survivors, Goldie led efforts to examine policies, coordinate outreach events, and develop trainings on how to cultivate safe and accessible environments for trans survivors in Kentucky. Goldie is pursuing an M. Ed. in Clinical Mental Health Counseling.

You can reach Goldie by email here.

Looking for support from Goldie? Click here to schedule a meeting! 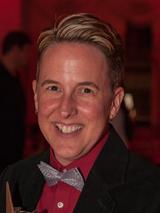 You can reach Lisa by email here. 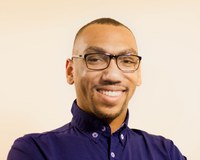 Aaron Weathers (he/they) is the Assistant Director for the LGBT Center Health Sciences Campus. As a 2013 graduate of the University of Louisville, Aaron was a member of the UofL Debate Team and an active student in the LGBT Center’s early days. As a co-founder of the student organization, Blkout, Aaron was a recipient of the Katy Garrison LGBT Student Leadership Award. Aaron holds his Bachelor’s in Pan-African Studies with a concentration in women, gender, and sexuality studies. He received his Master’s in Communication from California State University Fresno in 2017.

You can reach Aaron by email here.

Looking for support from Aaron? Click here to schedule a meeting! 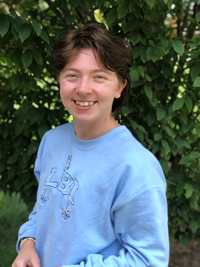 Adrian Dodd (he/they) is a Social Media Assistant with the LGBT Center. They are a second year meteorology student here at UofL, where they are working on research about evacuation behavior and accessibility for disenfranchised communities. They are the leader and creator of the Rocky Horror Picture Show UofL RSO, which highlights queer culture and history through performances of the show. In addition to producing the show, they also proudly play Columbia. Adrian has been with the LGBT Center for less than a year, but have spent their time on the social media side of things, promoting and highlighting the wonderful events and assistance the center provides. 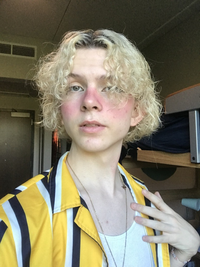 Dakota Loudin (they/them) is a Social Media Assistant with the LGBT Center. They are working to get their communications degree. They love to support the LGBT community as well as fighting for equal rights for all members of society. They like to use music as a way to connect to people and also enjoys crocheting and knitting. Their favorite music artists are Peach Pit, Taylor Swift, Doja Cat, and The Weeknd. If they aren't working, they are in their dorm either eating popcorn and watching horror movies or writing songs! 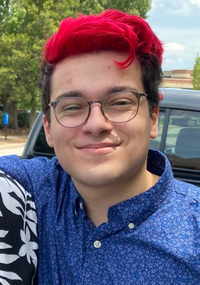 Moth Sanchez (they/them) is a Program Assistant with the LGBT Center. They are pursuing a major in Latin American & Latino Studies, and a minor in Chemistry. They are passionate about social issues, specifically ones pertaining to the LGBTQ+ community, indigenous people’s rights, Latine rights, and bodily autonomy. They enjoy reading Sci-Fi, playing Dungeons & Dragons, and listening to Alternative Rock music. When they aren’t assisting with LGBT Center events, you can usually find them hanging out with their three rats or listening to Weezer. 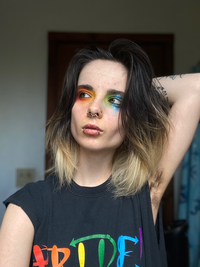 Thomas Hayes (he/they) is a Program Assistant with the LGBT Center. They are a student working to obtain a BFA in Painting, with a minor in LGBTQ+ studies. He is passionate about Social Justice, specifically focused on trans rights, reproductive rights protections, and inclusive healthcare for the LGBTQ+ community. Additionally, he advocates for the education and expression of queer history and identity. They enjoy creating and consuming art media, watching horror movies, and listening to heavy metal. Outside of work, they can be found cuddling their cat, working on new paintings, or exploring the local cemeteries.