History of the Center

The KSCIRC was officially granted Center status by the UofL Board of Trustees in May of 2001.

The roots of the KSCIRC began as a collaboration between Dr. Shields and John Johnson, M.D., now Professor and Chairman of Orthopedic Surgery.  In 1988, they established a joint Spine Research Laboratory with the goal to examine basic science issues for treating the injured spine and spinal cord.  In the early 1990's, they joined forces with other chairs, including Fred J. Roisen, Ph.D., then Professor and Chairman of Anatomical Sciences and Neurobiology, to support the growth of neuroscience research at the UofL.  An internal planning process led the UofL to make Neuroscience one of its five areas of research excellence, which enabled Neuroscience to undergo its active expansion. The other areas were Birth Defects, Cardiovascular Disease, Oncology, and Genetics & Molecular Medicine. 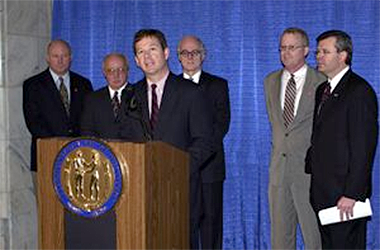 Two important new funding sources accelerated this growth and focused it increasingly in the central nervous system (CNS) area.  In 1994, the Kentucky Spinal Cord and Head Injury Research Trust (KSCHIRT) was established.  This trust, funded by surcharges on Kentucky traffic tickets, was initially used to fund grants at the UofL and the University of Kentucky in the areas of spinal cord injury (SCI) and head injury.  At this time, Dr. Shields began adding research expertise to his department by recruiting two faculty with strong research interests in CNS injury, Dante J. Morassutti, M.D., and David S.K. Magnuson, Ph.D..  Then in 1995, the UofL obtained a 5 year, $2.6M NSF EPSCoR grant to build infrastructure in support of developmental neurobiology.  This enabled the UofL to accelerate its recruiting and support of faculty whose research focused on various aspects of CNS development, injury, plasticity, and/or regeneration.

Subsequently the KSCHIRT instituted a program to fund endowments at the UofL and the University of Kentucky to assist in the growth of human capital and infrastructure.  This funding, which required matching dollars, spawned a truly unique partnership between the UofL and Norton HealthCare who joined together to match those funds, leveraging the KSCHIRT funding with private donations (Norton HealthCare) and "Bucks for Brains" (UofL).  "Bucks for Brains" is a unique program, instituted by Kentucky's Governor, Paul Patton, which uses a portion of the Commonwealth's budget surplus to fund research initiatives at the Universities of Louisville and Kentucky.