Our Focus...Initiatives to Move Discoveries to Drugs & Diagnostics (also IMD3) 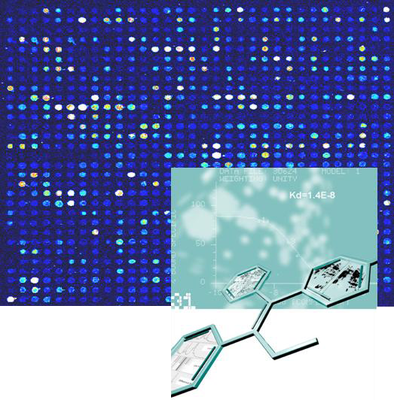 The Institute for Molecular Diversity & Drug Design (IMD3) was formally approved by the University of Louisville in March, 1999. Current membership consists of 24 faculty members representing eleven units at U of L (Biochemistry & Molecular Genetics, Brown Cancer Center, Chemistry, Medicine, Microbiology & Immunology, Pathology & Laboratory Medicine, Periodontology, Pharmacology & Toxicology and Ophthalmology & Visual Sciences.) Principal support for the IMD3 is derived from the College of Arts and Sciences and the Health Sciences Center, and the Director reports to the Executive Vice President for Research and Innovation.

The Institute for Molecular Diversity & Drug Design announced that Zhichao (David) Lu is the 2015 recipient of the Spatola Endowed Graduate Fellowship. The Endowment Fund was established by family and friends of Dr. Spatola, who had a lifelong interest in the education and development of young investigators.

Zhichao is an award winning graduate student in the Department of Chemistry where he is mentored by Professor G.B. Hammond, Endowed Chair in Organic Chemistry. The title of his fellowship application is Heavy Metal-free Synthesis of 3-Haloindoles as Vital Building Block for Indole Ring-containing Drug Molecules.

It was announced that two Spatola Graduate Research Fellowships will be awarded Fall 2016.

Prof. Gerald B. Hammond (Chemistry) received a $1.8 million dollar grant funded by the National Institutes of Health. Prof. Hammond provides this description of his research, which is funded through 2021: “Nucleophilic Halogenation Reagents: The halogens (fluorine, chlorine, bromine and iodine) are important intermediates in drug discovery, and, in the case of fluorine, a major presence in biologically active compounds. More than 25% of drugs contain fluorine atoms, including the top three pharmaceuticals. However, putting fluorine on a molecule can be very challenging. The primary goal of this NIH-funded grant is to develop of a new generation of halogenation reagents and conditions that are user-friendly and environmentally-benign, capable of opening the door for chemical reactivities and selectivities hitherto unknown.”

Our colleague Paula Bates recently was recognized with a Kentucky Commercialization Fund Award from the KY Science & Engineering Foundation for the project entitled..."A Novel Anticancer Agent with an Associated Predictive Biomarker".