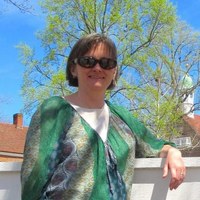 Image of Wendy Sharer standing in front of white fence with lawn and budding tree in background.

Dr. Wendy Sharer, Professor of English at East Carolina University, is the current President of the Coalition of Feminist Scholars in the History of Rhetoric and Composition and has previously served as Vice President. Prior to these roles, she was a member of the organization's Advisory Board for many years. During her time on the Advisory Board, she led a task force to investigate the potential limitation of the name of organization: the task force’s work resulted in the move from “Coalition of Women Scholars” to the more inclusive “Coalition of Feminist Scholars.” Through these experiences with Coalition leadership, she is familiar with some key contexts and practices that have limited inclusivity within the Coalition as an organization and across its conference-related endeavors, including the Feminisms and Rhetorics Conference as well as the Coalition's annual Wednesday evening event at CCCC. She has previously served as President of the Carolinas Writing Program Administrator affiliate and as a member of the CCCC Executive Board.