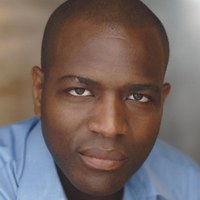 dr. vay is, inter alia, a performance artist and actor, he enjoys using his glamour shot here for academic purposes.

Dr. Vershawn Ashanti Young a.k.a dr. vay is Professor of Communication Arts and English Language and Literature at the University of Waterloo, where he also is a founding member of the Black Faculty Collective and the Black Studies Implentation Team--efforts that developed after the anti-Black racism protests over the murder of George Floyd. dr. vay brings expertise to this panel in the form of organizational experience and knowledge as current Immediate Past Chair of CCCC, 2020 CCCC Chair and 2019 Convention Chair. Under dr. vay’s CCCC leadership, the organization issued three social justice position statements for faculty and students: (1) “Statement on Effective Institutional Responses to Threats of Violence and Violent Acts Against Minoritized and Marginalized Faculty and Graduate Students”; (2) “This Ain’t Another Statement! This Is A Demand for Black Linguistic Justice”; and (3) “Statement on Black Technical and Professional Communication.”