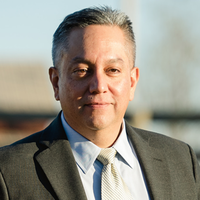 Dr. Ron Sheffield is a member of the Quechan Indian Tribe of Yuma, Arizona. He is currently a Clinical Assistant Professor and Executive in Residence at The University of Louisville. For the past eight years, he has taught Leadership and American Studies as an Adjunct Professor at Christopher Newport University and Advanced Organizational Change as a Professorial Lecturer with The George Washington University’s Graduate School of Education and Human Development. In addition, Ron owns and operates OrgScience, Inc., a Virginia-based management consulting firm.

Ron conducted his dissertation research on the Fort Yuma Arizona Quechan Indian Reservation; this work is titled The Influence of Language on Culture and Identity: Resurgence of the Quechan Native American Tribal Language. Dr. Sheffield interviewed many respected tribal elders and sought to gain an understanding of the influence that language restriction, and then later legitimization by the United States Federal government, had on tribal elders’ individual perspectives of culture and identity.

Dr. Ron Sheffield, Clinical Assistant Professor and Executive in Residence at the University of Louisville is an annually invited lecturer at The College of William & Mary in Williamsburg, Virginia, Youngstown State University in Youngstown, Ohio, and the Seminole Tribe’s Native Learning Center in Florida. His lectures have included: Cross-Cultural and Values Leadership, Leadership in Native America, Abuse in Indian Country, the Indigenous Perspective on Counseling, and the Journey through Formal Education for the Indigenous Student.

Ron has been an active member of the Board of Directors for the American Indigenous Business Leaders (AIBL.org) since 2013 and currently resides in Williamsburg, Virginia. He has been married for 32 years, has two brilliantly cool daughters (Hannah 30 and Emily 24), and one beautiful granddaughter, Giuliana.

Description: What does a decolonial approach to conference design look like? This roundtable seeks to help planners of academic conferences generally (and the Watson conference specifically) consider concrete ways to support Indigenous people, communities, and nations and dismantle white supremacist structures. Native scholars from several different institutions will share their experiences with conference planning and other projects; native and settler scholars from the University of Louisville (UofL), assembled for the first time, will begin the conversation about actions and initiatives that UofL might take and that the Watson Conference could advance. As they offer their perspectives, presenters will draw on their expertise in archaeology, geography, leadership and organizational development, linguistics, linguistic anthropology, literary studies, rhetoric, and sociology.