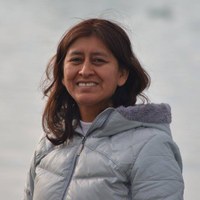 Hilaria Cruz, a brownskin woman with brown hair who is smiling. She is standing against a white background.

Dr. Hilaria Cruz is a linguist and a native speaker of the Chatino language spoken in Oaxaca, Mexico and by members of the Chatino diaspora residing specially in the Southeastern United States including North Carolina, Georgia, and Alabama. She teaches Native American religions and linguistics in the Comparative Humanities department at the University of Louisville. Hilaria has been collaborating with computer scientists to further the study of indigenous and endangered languages and the cultural practices associated with these communities. She is also passionate about creating children’s books in indigenous languages of North America to fill the scarcity of materials in these languages. She is currently a board member of the Special Interest Group for Endangered Languages with the Association for Computational Linguistics.

Description: What does a decolonial approach to conference design look like? This roundtable seeks to help planners of academic conferences generally (and the Watson conference specifically) consider concrete ways to support Indigenous people, communities, and nations and dismantle white supremacist structures. Native scholars from several different institutions will share their experiences with conference planning and other projects; native and settler scholars from the University of Louisville (UofL), assembled for the first time, will begin the conversation about actions and initiatives that UofL might take and that the Watson Conference could advance. As they offer their perspectives, presenters will draw on their expertise in archaeology, geography, leadership and organizational development, linguistics, linguistic anthropology, literary studies, rhetoric, and sociology.