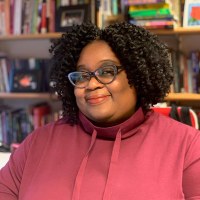 Photo of Gwendolyn Pough in front of a bookcase

Dr. Gwendolyn D. Pough is Professor and Chair of the Department of Women’s and Gender Studies at Syracuse University. She is Dean’s Professor of the Humanities and the William P. Tolley Distinguished Teaching Professor in the Humanities. She is a child of the 1970s who came of age in the 1980s and became a grown-ass black woman in the 1990s. She is a hip-hop generation, Black feminist writer and thinker who writes in any genre she feels like. She has published a book monograph on women and hip-hop, academic articles, creative nonfiction essays, poems, and romance novels, and she has also co-edited an anthology and three special journal issues. She is a past Chair of the Conference on College Composition and Communication (CCCC). And she is currently on the executive boards for the Coalition of Feminist Scholars in the History of Rhetoric & Composition, the Rhetoric Society of America, and the Association of Rhetoric and Writing Studies.