My laboratory studies the bacterial pathogens Salmonella and Rickettsia. We use Salmonella as a highly tractable model organism to delineate the mechanisms through which pathogens manipulate host cells to either grow within them or exploit them as vehicles for dissemination to deeper tissue. Rickettsial infections occur worldwide and Rickettsia are important emerging or reemerging pathogens and have the potential to be used as weapons of bioterrorism. There are two Salmonella questions and one Rickettsia question in my laboratory:

Salmonella question #1) How are human proteins subverted by pathogens to facilitate intracellular growth?

To begin to answer this question, we designed a fluorescence based high throughput RNA interference assay and screened the entire human genome at Duke University for host factors that allow intracellular Salmonella growth. In this screen, we individually depleted host cells of every human protein with siRNA, and infected them with Salmonella expressing the green fluorescent protein. We incubated the infected host cells overnight and then stained them with a DNA stain that lit up the host nuclei and analyzed them for green fluorescence. Cells that had roughly the same amount of the nuclear stain, indicating that host cell health was not affected, but displaying reduced green fluorescence were lacking a protein that Salmonella uses to its advantage. In all, we identified 252 human proteins, that we are beginning to characterize, that permit Salmonella growth within infected, human cells. The long-term goal of this project is to advance our understanding of the Salmonella/macrophage paradigm, which may provide us with insight into the underlying shared logic through which numerous pathogens manipulate host cells. Also, these host susceptibility factors can potentially be exploited as a novel class of anti-microbial targets and finally can illuminate many aspects of fundamental host cell biology. The microscopy figure shows a non-silencing control and 24 of our stronger, more interesting hits. Host cell nuclei are blue, Salmonella is green.

Salmonella question #2) Through what mechanisms do intracellular pathogens disseminate within hosts to cause serious, systemic disease?

The long-term goal of this project is to develop and test comprehensive, global models that account for reverse transmigration and its regulation. Reverse transmigration is a naturally occurring process in which dendritic cells traverse endothelium in the basal to apical direction. While Salmonella can spread from the gastrointestinal tract to the bloodstream within these cells, it is conventionally thought to be passive on the part of the microbe. We have uncovered evidence however, indicating that Salmonella can actively parasitize reverse transmigration to expedite bacterial colonization of internal organs, creating a much more serious, systemic infection. This is likely relevant to the spread of numerous pathogenic microbes not only from the GI tract, but also from lung tissue and the oral mucosa to the systemic circulation. Reverse transmigration also functions in the invasion of the bloodstream by some cancerous cells and in excessive inflammation disorders such as autoimmune and graft versus host disease, which piques our long-term interest in designing drugs that either inhibit or augment the process.

We recently developed an in vitro model of reverse transmigration. In this assay, endothelial cells are grown into confluent monolayers on membranes with small pores. They are then placed upside down in a blind well and another membrane is coated with a natural extracellular matrix and placed right side up in the device. Infected dendritic cells are then added to the top compartment and the reverse transmigration of these cells across the endothelial monolayer into the bottom compartment is measured. This models the invasion of the bloodstream by Salmonella-infected dendritic cells associated with the gastrointestinal epithelium. In prior work, we discovered a Salmonella protein, which is secreted into infected host cells to stimulate reverse transmigration. We will use this assay to characterize this virulence factor and to screen for new ones. Also, this assay will be used to identify and characterize host factors that facilitate and inhibit reverse transmigration and to study how Salmonella perturbs them to its advantage.

What proteins does Rickettsia inject directly into human cells and what do they do?

Some members of the genus Rickettsia are responsible for the most severe bacterial diseases of humans and two notoriously virulent species are classified as select agents with potential use as bioweapons. The danger of rickettsial organisms being used for nefarious purposes is heightened by their minimum infectious does of less than 10 organisms, their ability to be acquired via aerosol, as well as efficient arthropod transmission. Diseases caused by rickettsial organisms, together with plague, influenza and dysentery, have been important in the molding of human destiny, causing more deaths than all the wars in history. Because of their unique biological characteristics such as environmental stability, small size, aerosol transmission, persistence in the infected hosts, low infectious dose and high morbidity and mortality, Rickettsia prowazekii and Coxiella burnettii have been weaponized. These attributes would also make other pathogenic rickettsiae desirable biothreat agents. R. prowazekii has been field-tested with variable effectiveness by the Soviet and Japanese armies. Considering today’s advanced biotechnology, the misuse of these rickettsial pathogens that are molecularly tailored for higher virulence or multiple antibiotic resistance in the hands of bioterrorists is of real concern, particularly when there are limited effective antibiotics and no licensed rickettsial vaccines.

Only a handful of rickettsial virulence factors have been identified because of the intrinsic difficulty in working with these obligate intracellular bacteria and their genetic intractability. Nearly all virulence factors are secreted. The effectors of type IV secretions systems (T4SS) are an interesting subclass of secreted proteins as they are exported beyond the bacteria, into host cells, where they intimately engage host molecules, to manipulate host cells in sophisticated ways that benefit the pathogen. A full understanding of the pathogenesis of Rickettsia requires the identification and characterization of T4SS effectors. We have analyzed numerous rickettsial genomes and observed the presence of conserved genes that encode a T4SS. While the structural components of T4SSs are related, the associated repertoires of effectors are often unique, making them more difficult to identify through genomic analysis. The identification of secreted rickettsial effectors is further hampered by the T4SS secretion signal not being well defined and also by rickettsial virulence factors not being clustered on the chromosome as they are in some organisms and finally because of the paucity of genetic tools for analyzing this organism.

We are currently identifying and characterizing T4SS effectors from Rickettsia monacensis, which while capable of actively invading and growing extensively within human cells, can be worked with in BSL-2 facilities. Working with a BSL-2 level model organism initially will expedite the acquisition of knowledge and development of genetic systems, which ultimately, we will confirm and extend into highly pathogenic rickettsial organisms in our BSL-3 facilities in the University of Louisville Regional Biocontainment Laboratory.

In this project, we are screening globally for T4SS effectors and will characterize ones that are conserved amongst rickettsial organisms. We will then assess their impact on invasion and intracellular growth, determine their subcellular localization within host cells, assess their expression kinetics and finally identify what host proteins they subvert. The data generated here and techniques developed will set the stage for deleting conserved effectors in highly pathogenic strains of Rickettsia in future work to confirm their phenotypes and test them as attenuated vaccine strains. Additionally, as the effectors are injected directly into host cell cytosol where the MHC-1 machinery has access to them, they could be expressed as heterologous antigens in established attenuated vaccine carrier strains such as certain Salmonella derivatives. Also, in the future, we will use the genetic systems developed here in more pathogenic strains of Rickettsia to identify unique virulence factors that contribute to their lethality. In addition to the implications for vaccine development, we suspect that the identification and characterization of this important part of the molecular, functional interface of Rickettsia and its human host may directly lead to new therapeutic intervention strategies, which is important as there is really only one antibiotic available that is effective in treating rickettsial infections.

Office: You can find me in room 355 of the Shumaker Research Building on the main campus (Belknap). tel. 502-852-0966 email: micah dot worley at louisville dot edu

Laboratory: You can find us in room 311 of the Shumaker Research Building on the main campus (Belknap). 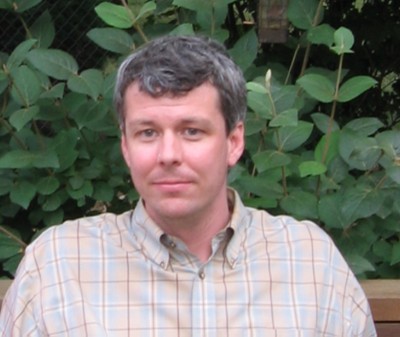 Welcome to the Worley lab

We are a laid-back tight-knit group that take cutting edge approaches to understanding Salmonella and Rickettsia pathogenesis. Salmonella sickens hundreds of millions of people each year world-wide, resulting in about three million deaths. In addition to public health concerns, we also study Salmonella because it is a convenient model pathogen to explore the shared, underlying logic through which all pathogens manipulate host cells, potentially with interdisciplinary implications on fields other than infectious disease such as metastasis and autoimmune disorders. We study Rickettsia because it is an important emerging or reemerging pathogen and is a potential bioweapon. Our Rickettsia studies are focused on identifying and characterizing the molecular, functional interface of Rickettsia and its human host with an eye toward developing a vaccine and new anti-microbial therapies.

Raw data from the global RNAi screen. Host cells are in blue, Salmonella is green. Upper left is a non-silencing control. Akt1 is a positive control. 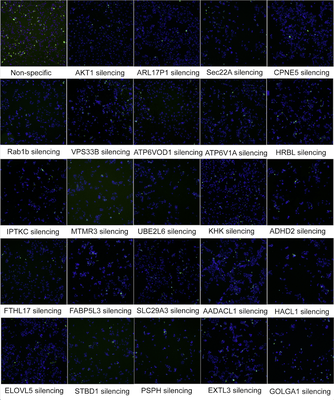