A Microhistory of Theological Controversy through Archaeology: Exuperantius and the Competition for the Bishopric of Aquis Celenis 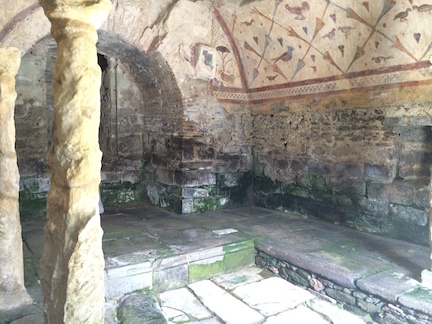 Sometime before the turn of the fifth century, Exuperantius was ordained as bishop of Aquis Celenis, a small regional see on the northwestern coast of Spain. However, Aquis Celenis already had a bishop. The conflict that this episcopal takeover and other problematic ordinations in the region caused is recorded in a trial held at the First Council of Toledo in 400 CE. Several men at the trial also were accused of adhering to the teachings of Bishop Priscillian of Avila, who had been charged with sorcery in 385. Due to the historical significance of this theological controversy—Priscillian was the first “heretic” to be executed under imperial order—scholars have largely overlooked the case of Exuperantius.

This talk will demonstrate that despite a dearth of written sources, a micro-historical approach to the trial is possible through analysis of archaeological evidence from numerous sites in Aquis Celenis and nearby cities and rural estates. In particular, changes in public and private settlement features, along with materials connected to commerce and industry, will be used to provide insight into the dynamic community of artisans, factory workers, merchants and elite patrons living and working in Aquis Celenis. Creating this picture of the larger context of Exuperantius, who was deemed more popular than the bishop he replaced, reveals that social and economic factors contributed to his appointment and the Priscillian Controversy.