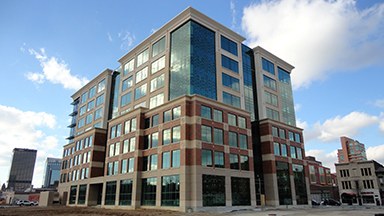 Located in the heart of downtown Louisville, adjacent to the city's burgeoning medical community, our new 180,000 square foot, eight story building is the first in a soon-to-be four building complex consisting of shared green spaces, parking garages and easy access to downtown quality of life. The building offers state of the art adaptable spaces consisting of dry labs and office space. Available in 2013, this exciting new development will be a catalyst for economic development and innovation throughout the region.

Shelby Campus is a 230-acre area located in the suburbs at the intersection of Hurstbourne Lane and Shelbyville Road. A 20-acre core of the campus is identified for academic purposes. The University’s Regional Biosafety Laboratory is located in the southeast corner of the property on Hurstbourne Lane, and the remaining acreage is designated for research and office buildings.

When completed, the impressive ShelbyHurst Office Campus will have over 1.5 million square feet of modern office space managed, developed and leased by NTS Development Co., in partnership with the UofL Foundation. The first three projects are in full swing.

Planning and design is currently underway for 500 and 700 North, ShelbyHurst’s newest properties. With construction set to begin later this year, these properties will have between 100,000 and 130,000 square feet of Louisville’s most prestigious office space.

ShelbyHurst was designed around a four-lane boulevard through the campus bordered by bike lanes and wide attractive sidewalks. Special attention was given to enhancing green space and improving the life of the surrounding community. The green design of the entire development, combined with the convenience of a new boulevard and modern throughways, will facilitate driving, walking and biking through the campus. 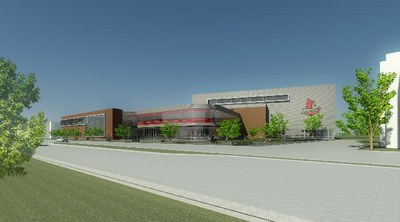 Opening in Fall 2013, the new University of Louisville Student Recreation Center (SRC) will provide much needed space for the expansion of recreational sports and fitness opportunities for UofL students.

The 128,000 square foot SRC facility will increase the program offerings in all aspects of the IM-Rec Sports program. Intramural Sports, Informal Recreation, Sports Clubs, and Fitness will increase dramatically. In addition, the SRC will also provide space for activity classes offered by the Department of Health and Sports Studies. 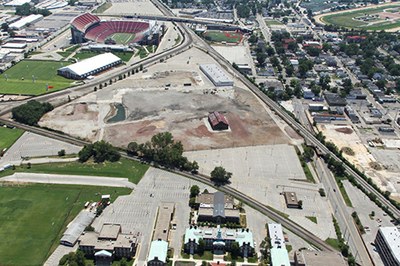 Ground was broken this summer and plans are underway for the 390-acre Belknap Engineering & Applied Sciences Park, the centerpiece of a Signature Tax Increment Financing (TIF) district, designed to stimulate economic growth in an area around UofL’s Belknap campus. The TIF district covers more than 900 acres stretching from Belknap Campus south to the Watterson Expressway. The Kentucky Economic Development Finance Authority recently approved the TIF, paving the way for what could be an estimated $1 billion over 30 years.

The historic TIF project will ultimately leverage the academic and research functions of the University of Louisville into an exceptional economic engine that will result in an influx of high-wage jobs, growing revenue for the region and state. The park will be designed to attract researchers and private businesses that have the opportunity to work directly and collaboratively with UofL, and ultimately create an economic hub that will transform the South and South Central areas of Louisville.

Plans include a $31 million road project that will provide access to a 39-acre area that university officials plan to develop into the Belknap Engineering and Applied Sciences Research Park. UofL Foundation provided $6.2 million to fund the road project and the Kentucky Transportation Cabinet provided $24.8 million. State funds will be available July 1.

The design phase of the road project is just beginning, but UofL Foundation officials hope road construction will start in the fall and be completed in 2014. Ramsey said the research park may take 15 to 20 years to fully develop.

Preliminary park plans include providing additional research facilities for the J.B Speed School of Engineering, offices for applied sciences researchers and offices for private companies that want to build a partnership with the engineering school.

The SAC renovation would begin following the opening of the new Student Recreation Center. The work is intended to provide more meeting and gathering space for students and campus assemblies, as well as updating the building’s mechanical, electrical and plumbing infrastructure. The initial work would be limited to the east side of the SAC. The university would be responsible for covering payments on the $9.6 million bond issue.  Its debt service source, according to the proposal, is the existing Student Activity Center Building fee. 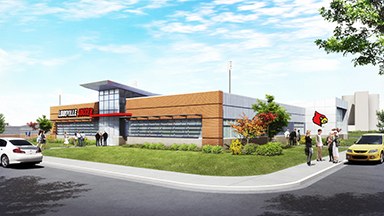 This stadium will be a state-of-the- art $17.5 million facility that our Men's and Women's Soccer Programs will call home. The location of the stadium will make it one of the most visible landmarks on the UofL Campus, as it will run parallel with Interstate 65. It will be centrally located between two of the University's cornerstone buildings, the Swain Student Activities Center and Papa John's Cardinal Stadium.

It will have seating capacity for over 5,300 fans and will feature a 15,500 square foot training center that will include identical locker rooms for each team, coaches' offices and a sports medicine training room. This stadium will be the second largest project the athletic department has undertaken behind Papa John's Cardinal Stadium.

This state-of-the-art academic center will be located beneath the Norton Terrace at the south end of Papa John's Cardinal Stadium. The Center will be critical to the mission of the Athletic Department providing best in class academic and leadership support services for the nation's premier student-athletes. Louisville now proudly competes for the world's finest student-athletes across 23 sports. The academic center is our missing piece. 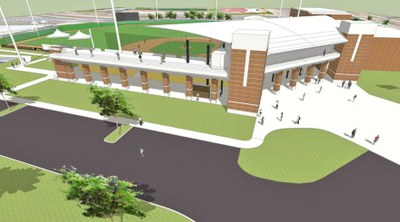 A key component of the funding for the Jim Patterson Stadium Expansion is a uniquely designed sculpture to recognize the generous contributions of project donors. To honor these commitments to the program, the donor will have an opportunity to autograph a baseball to be permanently displayed within an 8-foot tall Cardinal Bird Sculpture. Prominently located at the entrance to Jim Patterson Stadium, donors participating at the $1,000 level will be recognized with a baseball in the gold area of the sculpture, while donors contributing at the $300 level will be recognized in the red area.

New Housing - The Grove at Louisville

A large student housing development near the University of Louisville in the Lucky Horseshoe neighborhood is moving forward. Plans for the seven-acre site include 252 rooms with 656 beds. Campus Crest Communities, Inc. has purchased the land at 2501-2605 South Fourth St. which once housed a manufacturing facility. Construction for this project should begin in May 2013 and be ready for students by the 2014-2015 academic year.

The facility will undergo a $1.3 million face lift funded by the UofL Foundation and the UofL Department of Athletics. When completed, it will offer more than 10 times the space of the current 2,000 square foot facility in the basement of Crawford Gym, which university leaders have deemed inadequate to meet the growing needs of UofL’s award-winning health management program, Get Healthy Now.

The new facility will feature more than twice as many cardio stations, including treadmills, stationary bikes and elliptical machines, as well as more weight-training equipment. The second-floor gymnasium will serve as a practice facility for UofL’s national champion Ladybirds and cheerleaders. An elevated indoor walking track will encircle the gym.

HSC Overhead Utility Burial Approximately two blocks of high voltage electrical overhead utility lines, from the Clinical and Translational Research building to the School of Dentistry, will be replaced with underground lines. Burial of these lines eliminates vulnerability of power lines to ice, snow, wind, falling trees and motor vehicles; improving the dependability of electrical power to the area.

This Center supports the region’s growing research needs  and the Bio-Defense and Emerging Infectious Disease research agenda of the National Institute of Allergy and Infectious Diseases. The Center contains two BSL-2 laboratories, four BSL-3 Laboratories, and three ABSL-3 Holding/Procedure Room Suites along with building support and mechanical spaces and is a LEED Gold Facility.

The $2.75 million expansion will feature a team clubhouse with a locker room, a video room, and a players' lounge. Dan Ulmer Stadium will see the addition of 200 chair back seats, bringing the seating capacity to 1,000. The project also will add a 2,380 square foot fan terrace wrapping around the back of the stadium, as well as a new press box that will more than double its current size.

A $50 million expansion of the Speed Museum is planned through 2015. The new 60,000-square-foot North Building will help create one of the finest experiential art museums in the country and will double the overall square footage and nearly triple the gallery space from the existing wing. The expansion will create a state-of-the-art space for larger special exhibitions, new contemporary art galleries, a family education welcome center, indoor/outdoor café, museum shop, and a multifunctional pavilion for performances, lectures and entertaining. Additionally, the new Elizabeth P. and Frederick K. Cressman Art Park and public Piazza will be created for the display of sculpture that will engage University of Louisville students and faculty and museum visitors.

Board of Trustees Meeting Minutes