Green screen effects is the process of removing a specific color, called "keying," from an image or video and replacing it with something else.  You've seen this anytime a weather reporter is shown in front of a map or news reporters have a second screen shown over their shoulder.

The process to create this effect starts by filming/photographing in front of a green screen.  Then, using an editing program, the green color is removed.  By placing a second video or image in front of or behind the first, the effect is completed.  Here is a quick explanation of green screen effects as seen in Hollywood productions.

Setup a green screen at home for cheap

How can I green screen - Video?

How can I green screen - Images 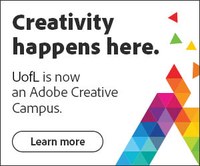 Adobe Creative Cloud is free for everyone at UofL!