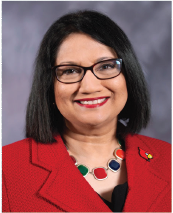 Neeli Bendapudi is the 18th President of the University of Louisville. The university's Board of Trustees selected her in April, 2018, after a nationwide search.

Prior to her move to Louisville, Bendapudi was provost and executive vice chancellor at the University of Kansas. At KU she was lauded as a skilled collaborator, fundraiser, faculty advocate and for her affable personality—telling people to “just call me Neeli.”

Bendapudi has a Ph.D. in marketing from the University of Kansas and teaching experience at The Ohio State University and Texas A&M University. In 2011, she returned to KU to become the School of Business dean and H.D. Price Professor of Business. In 2016, she was promoted to provost and executive vice chancellor.

An expert in the study of consumer behavior in service contexts, Bendapudi’s research deals with a customers' willingness and ability to maintain long-term relationships with firms and with the brands and employees that represent them. Her work has been widely published and featured in popular media outlets.

Previously, she served as chief customer officer of the Huntington National Bank. She sits on the Board of Directors of the publicly held Lancaster Colony Corporation and has served on various private, public and non-for-profit company boards including Fred’s, Sheetz, Freightquote and including MRIGlobal, an independent research institute.

Personal
Bendapudi and her husband, Venkat, were born and raised in India, in the city of Vizag, state of Andhra Pradesh. She earned her undergraduate and master’s degrees there before coming to the U.S. to complete her doctorate.