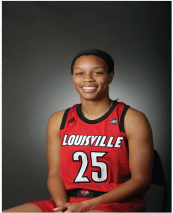 A three-time WBCA All-American, twice named WBCA First Team All-American, Asia Durr finished her career (2015-19) with 2,485 points, which ranks second in school history and fifth in Atlantic Coast Conference history. She knocked down 374 3-point field goals, which is the all-time ACC record and ranks second in UofL history. She won ACC Player of the Year honors as a junior and a senior, making her the first player in Louisville program history to be named conference player of the year multiple times. After her historic senior season, she was named Dawn Staley Award winner for best guard in the country and the Ann Meyers Drysdale Award winner for best shooting guard in the NCAA. She was named WBCA, Associated Press, Wooden Award and espnW first team All-American, and USBWA, Senior CLASS Award second team all-american. In addition to being named ACC Player of the Year, she was named the ACC Kay Yow Student-Athlete of the Year. She helped lead the Cardinals to 123 wins in her career, which marked the winningest senior class in program history and she helped lead Louisville to the 2018 Final Four in Columbus, Ohio. She was drafted second overall by the New York Liberty in the 2019 WNBA Draft.