The origin of the Elizabeth Cady Stanton Awards Luncheon lies in the 2001-2002 Tenth Anniversary Year of Celebration for the UofL Women’s Center. During that celebration, the Center hosted a kick-off luncheon with a keynote; and invited university staff and faculty to attend the event, bringing a younger woman as a guest. This model was so successful, that the Center repeated it at the conclusion of the Anniversary Year with a gala dinner honoring UofL’s “founding mothers” whose vision gave birth to the Commission on the Status of Women; the Women’s and Gender Studies Department; and the Women’s Center.

The Tachau Award recognizes a member of the U of L community who has done significant work toward gender equity.
2010 Mary K. Bonsteel Tachau Gender Equity Award Recipient:

Ms. Bonny Manning a staunch advocate for Kentucky’s women, past president of the local and state chapters of the Business and Professional Women; and organizer of the Equal Pay Coalition to begin lobbying legislators in the Commonwealth for passage of HB 399.

Tachau Gender Equity Award Recipient, Bonny Manning (center) poses with Susan Duncan, Co-chair of the U of L Commission on the Status of Women (COSW) and Mary Karen Powers, Director of the Women's Center.

The Nichols Award, given to a U of L graduate student for travel or other professional development. 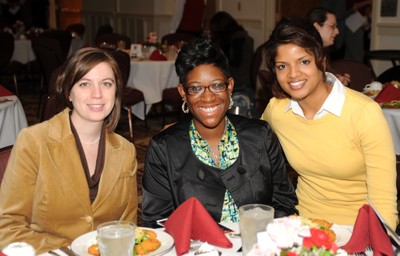