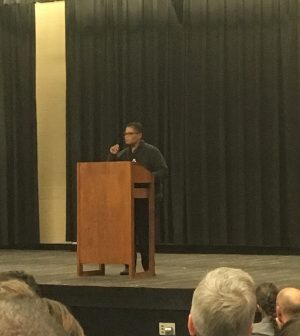 Her Nov. 1 speech landed on the same week as high-profile mail-bomb attempts, the Pittsburgh synagogue mass shooting and Louisville’s race killings. She spoke about these incidents, the rise of “white terror,” the intertwining nature of capitalism and racism and the role that activist movements play in political change.

Taylor called for a moment of silence for the 13 lives that were lost to hate in the last week. She condemned President Trump on his rhetoric and policies that she said ultimately led to the recent killings.

“No he may not have pulled the trigger, but after two years of racist demonization and hate speech, generating from the highest office in this country, he certainly helped to load to gun,” Taylor said.

She said it’s not just Trump, but his administration and the Republican Party that are responsible for making white supremacy the center of government and policy-making.

Taylor said white nationalism and Trump’s rise to power came immediately after the administration of the first black president and the rebellions against police brutality in Ferguson, Missouri and Baltimore.

“How did we go from Black Lives Matter and a black president to the rise of a white supremacist president and the emergence and white supremacy movement?” she asked the audience.

Taylor talked about the purpose and creation of the Black Lives Matter movement, and said this movement had a special dynamic of a black political class that was absent during the civil rights movement. She also said the Democratic Party and liberal policies marginalized and ignored black people during the absence of a sustained anti-racist movement in the 90s and 2000s.

“These years were marked by the ascendency of liberal law and order, and liberal anti-welfare politics led by Bill Clinton and the Democratic Party,” Taylor said.

“The implications of these policies meant that poor and working class African-Americans were disappeared into prisons and the so-called criminal justice system were simply rendered disposable by racist and punitive welfare reform laws.”

After torching the Democratic Party, the Clintons and black politicians for their impact on poor and working class African-Americans in the early 2000s, she said Hurricane Katrina exposed the conditions of 21st-century poor African Americans.

“The invisibility of black people and the illegibility of black struggle was violently wrenched open in the light of day when Hurricane Katrina struck New Orleans in 2005,” she said.

The response and outcry after the storm forced a national discussion about race, led by Barack Obama during his campaign and presidency. Taylor said Obama emphasized black behavior and culture as the root of the issues confronting black America. She said his desire to find middle ground reflected continuity instead of a change.

“His strained effort to explain black inequality as a combination of structural and self-induced behavioral limitations fit with the politics of the black political class. It also resonated with the strain of political thought in black communities that blamed black families as well as structural inequality for black hardship,” she said.

Along with Obama, Taylor said other black elected officials failed to bring change, economically and socially, to the black community during Obama’s presidency.

“Often black elected officials helped to narrate the experience of African-Americans in ways that white elected officials could never get away with, by blaming blacks through rhetoric that emphasizes culture, immorality, and irresponsibility as the source of black inequality in suppose to racism, discrimination, and economic inequality,” Taylor said.

Taylor said after the Black Lives Matter protest lost its fire, she saw those in the movement look toward moving from protests to politics.

She defended those who choose not to vote due to a cynicism caused by disappointment and the gap of wealth between representatives and their constituents.

Taylor told the audience that there must be protest with politics in order to bring about real change.

“You cannot assume that development of a left or progressive current within the Democratic Party is in the position to deliver significant political reforms without massive political pressure in the form of a social movement being exerted,” she said.

Taylor said rich capitalists and politicians blame the economic situations of poor whites on their morality and culture. She said liberals also minimize the poor-white experience with the concept of “white privilege” that fails to capture the reality of the white working class. She said some use racism to explain the poor conditions of ordinary white people in America today.

Taylor said it will take a massive social movement to fix the various problems that many American citizens face today.