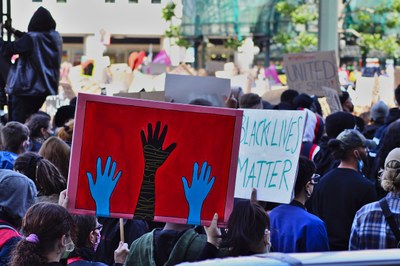 Department statement regarding Black Lives Matter, and resources on race and racism

The Department of Sociology supports the protests against racial injustice and stands with Black faculty, students, and staff.We adhere to the following statement from the American Sociological Association on June 1, 2020:

"The ASA shares in the public outrage over the police killing of George Floyd and numerous other Black and brown people at the hands of racist cops. We wish to acknowledge and condemn the systemic racism in society and the criminal justice system. Indeed, the death of Floyd is but the most recent in a sordid history of violence against Black people in America. Over the centuries, police brutality has played a key role in oppressing African Americans and people of color. Further, as sociologists have documented, police departments are funded through a predatory system that unfairly draws on revenue from communities of color. Institutional racism in all its forms must be condemned in the strongest possible terms. As sociological scholars and citizens, we have a responsibility to study and speak out regarding all forms of racism and injustice."

From our faculty, adjuncts and graduate students, what follows is a list of recommended resources on race and racism:

A comprehensive list of anti-racism resources directed towards white people that was posted on Teaching with a Sociological Lens can be found here.