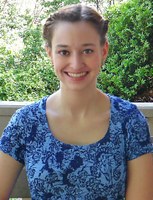 Junior April Willis has received a Critical Language Scholarship to study in Xi’an, China, at Shaanxi Normal University. She will be immersed in the culture, stay with a host family and focus on mastery of the Chinese language.

The Critical Language Scholarship is an overseas language and cultural immersion program for U.S. undergraduate and graduate students. The fully-funded scholarship aims to expand the number of U.S. residents proficient in critical languages while building relationships between people in the United States and other countries.

“This award will help me in my goal of understanding the Chinese language, people, and culture better. Chinese is considered a critical language by the US government. Now, more than ever, it is important for Americans to pursue cultural understanding with other nations.”

"Professors Li Zeng and Delin Lai wrote me letters of recommendation. Dr. Zeng is the director of the Chinese Studies program at the University of Louisville. I worked with Dr. Zeng last summer at the STARTALK Chinese program (sponsored by the Defense Department and the Crane House). Dr. Lai was the professor who taught my Asian art and Introduction to Asian Studies classes. Doctor Patricia Condon helped me edit and focus my essays. Heather Turner helped me edit my essays."