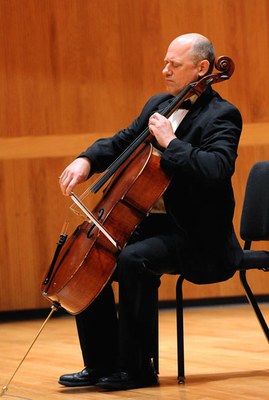 Cellist Paul York will perform the world premiere of David Maslanka’s “Remember Me” during a concert at the University of Louisville. UofL faculty member to perform world premiere cello piece

York, professor of music at UofL, will debut Maslanka’s piece at 7:30 p.m. Sunday, Feb. 23, at Comstock Concert Hall. The premiere will feature York as the solo cellist as well as 19 additional players. The Chamber Winds Louisville, The Louisville Concert Band and the University Wind Symphony also will perform pieces by Maslanka and composers Payton McDonald, Tyler Taylor and Jack Stamp during the concert.

Maslanka’s latest piece, “Remember Me,” came about as Maslanka was deeply moved after reading a book about the Holocaust that detailed the death of an unknown young child.

“On reading this I was deeply drawn in, without knowing where I was going or why. I knew that something of this had to be spoken through me in musical sound. Musical vibration heals,” Maslanka said in his notes on the piece. “There was the realization that this music was for the little child. The child’s life remembered in this way is that life redeemed; it is evil transformed; it is my own life transformed and redeemed.”

Maslanka is a composer best known for his wind ensemble compositions. York and Fred Speck, director of bands and professor of music, were part of a consortium of several universities that commissioned Maslanka to write a piece for cello and chamber winds. Maslanka will be in residence at the School of Music from Feb. 20-23.

Sunday’s concert is free and open to the public. For more information contact Fred Speck at 502-852-5495.