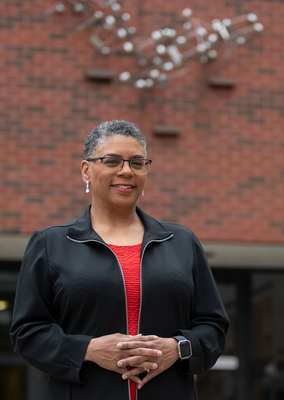 Dr. Teresa Reed is a native of Gary, Indiana, and she traces her musical roots to the Black Pentecostal church.  She received her Ph.D. in Music Theory, Music History and Literature, and African American Studies from Indiana University.  Her publications include reviews, encyclopedia entries, and articles in Black Music Research Journal, Journal for Eighteenth Century Studies, Journal of Religious Thought, Popular Music and Society, and Readings in African American Church Music and Worship.   Two of her books, The Holy Profane:  Religion in Black Popular Music (2002) and The Jazz Life of Dr. Billy Taylor (2013), won national honors from the Association for Recorded Sound Collections.  She has been featured on National Public Radio's Curtains at 8 and on the BBC's The Gospel Truth, and her work has been favorably cited and/or reviewed in Vibe, Downbeat Magazine, Publisher's Weekly, New York City Jazz Record, JazzTimes, New York Review of Books, and on NPR.  She has lectured nationally and internationally on various aspects of music theory and African American music.  She is a long-time consultant with the College Board and served consecutive terms as Chief Reader for both AP Music Theory and AP Capstone/AP Seminar.  Most recently, she authored modules for the College Board's Pre-AP Arts curriculum, launched nationally in 2018.  She was on the faculty of the University of Tulsa for twenty-five years, where she served as Director of the School of Music, Director of the African American Studies Certificate, and Associate Dean of the College of Arts and Sciences.  She was also an adjunct professor at Phillips Theological Seminary and an instructor of music theory at the Barthelmes Conservatory of Music.  She joined the University of Louisville as Dean of the School of Music in 2019.