US Secretary of State Mike Pompeo to speak at UofL

(Nov. 26, 2019) Secretary Michael R. Pompeo is the next guest in the McConnell Center's Distinguished Speaker Series. 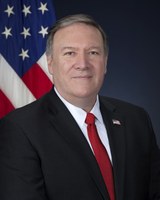 US Secretary of State Michael Pompeo

Michael R. Pompeo, the 70th US Secretary of State, will speak at the University of Louisville Dec. 2 as part of the McConnell Center’s Distinguished Speaker Series.

Pompeo is a former director of the Central Intelligence Agency and a member of the US House of Representatives from Kansas’ Fourth Congressional District.

The secretary graduated first in his class from the United States Military Academy at West Point in 1986 and served as a cavalry officer patrolling the Iron Curtain before the fall of the Berlin Wall. After leaving active duty, Pompeo graduated from Harvard Law School, where he was editor of the Harvard Law Review.

“Secretary Pompeo is the seventh person to serve our nation as Secretary of State and speak as part of the McConnell Center’s Distinguished Speaker Series. In this important time in American history, I can’t imagine a more exciting leader to bring to Louisville,” said McConnell Center Director Gary Gregg.

The lecture, followed by a question-and-answer session, begins at 9 am. The event will be live-streamed at McConnellCenter.org and www.state.gov. It is not open to the public.