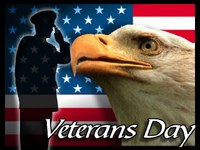 On the one year anniversary of his visit, the McConnell Center shares U.S. Sen. John McCain's (R-Ariz.) remarks on the importance of Veterans Day.

"You know, as well as I do, the world we live in remains a dangerous and uncertain one. But it is a better world than our fathers inherited and their fathers before them; a world purchased at great and terrible cost by sacrifices on killing grounds that are now green fields and quiet beaches in peaceful corners of the world. We should be proud of what they did; proud and humble. Humble in the knowledge that we enjoy our freedom because of the devotion of Americans who sacrificed greatly to secure the blessings of liberty to ourselves and our posterity — Americans for whom duty, honor, their comrades and love of country were dearer to them than life itself.
...
History does not remember all of them as individuals. We don't even know where they all rest. But we must not forget what they did and the debt we owe them. America does not depend on the heroism of every citizen. But all of us should be worthy of sacrifices made on our behalf. We have to love our freedom, not just for the private opportunities it provides, but for the goodness it makes possible...."

The McConnell Center also wishes to extend our gratitude to four McConnell Scholar graduates who currently serve in the U.S. Armed Forces: