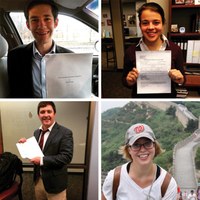 Paige Brewer, Danielle Robinette, Sean Southard and Sam Whittaker completed and defended their works, the culmination of their time as “honors scholars” at the University of Louisville.

Southard’s thesis, “James Wilson and Anglo-American Customary Constitutionalism,” explored Wilson’s legal and political ideas at the American Founding. “It’s been a tedious project, but I enjoyed working with my thesis advisor Dr. Mackey on exploring James Wilson, arguably the most educated mind during the revolutionary and constitutional eras,” Southard said.

Southard graduated with  a political science and history double major and served as chair of the McConnell Scholars Program. He also served as vice president of the UofL College Republicans. He is a 2011 graduate of Daviess County High School in Owensboro, and is now an account coordinator for RunSwitch, a Louisville public relations firm.

Robinette defended her thesis, “Bilingual Intercultural Education in Ecuador: Education as a Means of Language Revitalization,” in which she researched the viability of bilingual education for the indigenous Quichua-speaking Ecuadorians.

“Writing a thesis was terrifying and difficult, but I’m really glad to have struggled through it,” Robinette said. Robinette graduated with a double-major in Spanish and political science. She was community service chair for the McConnell Scholars Program, working extensively with Habitat for Humanity and the Kentucky Humane Society. She is a 2011 graduate of Highlands High School in Fort Thomas, Ky., and will pursue graduate studies in education at UofL. She is also part of the Teach Kentucky program.

Whittaker looked at the presidential election of 1860 in his thesis, “The Electoral Victory of John Bell in Kentucky, 1860.” His focused on Kentucky politics and the victory of the Constitutional Union Party.

“The thesis project provided a nice capstone to my undergraduate career. Although it took a lot of work and late nights, it was worth it,” he said.

Whittaker studied history, political science and economics at UofL, was president of Kappa Sigma Fraternity and was an active participant in UofL’s Relay for Life. He is a 2011 graduate of St. Mary High School in Paducah, Ky., and will attend the University of Cincinnati for graduate school.

Brewer focused her thesis on the politics of language in Kazakhstan. She studied political science, humanities and Russian studies at UofL. She was a member of the UofL student orientation staff and worked with the White Squirrel Literary Magazine. She is a 2011 graduate of Notre Dame Academy in Wilder, Ky., and will travel to Russia and Kazakhstan as part of Critical Language and Fulbright scholarships through the U.S. State Department.