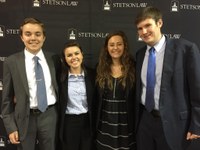 Both teams advanced to the second day of competition but were knocked out early. Despite the loss, head coach and McConnell Scholar alumnus Neil Salyer (‘01) said he remains both proud of this year’s results and hopeful for future success with a full team of returners.

“This year came with one of the most difficult case scenarios I have ever seen, even compared to law school scenarios. However, the students never gave up, regardless of how frustrating some of the practices were,” Salyer. “More significantly, the team ultimately began to come together and even thrive.”

This year’s case involved an undocumented alien who attempted to attend a private college in the presence of national legislation barring illegal aliens from pursuing higher education. Participating in the ACMCA competition required months of work studying and outlining the fictitious case, along with 18 related Supreme Court rulings. Teams of two drafted arguments, for which they were judged at the regional competition based on quality, respect for the moot court and oratory skills.

The team had a strong support system from both McConnell Scholar alumni and the UofL campus community. Local attorneys Sean Williamson (‘11) and Kirk Laughlin (‘10) spent significant time with the teams during the fall, offering their professional insights and expertise on the case matter and presentation styles. History and constitutional law professor Thomas Mackey, PhD, served as a judge during several practices, providing in-depth analysis of the team’s strengths and weaknesses.

The McConnell Center sponsors the only undergraduate moot court in the state of Kentucky.