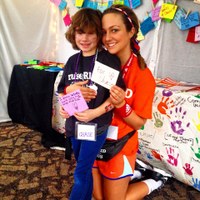 raiseRED is the only student-run organization to support the clinical and medical research efforts at UofL. Students raised more than $226,613 this year, which will support the work of Ken Lucas, MD, of the university's pediatric hematology, oncology and stem cell transplant program.

At the raiseRED dance marathon, UofL students danced with pediatric cancer patients and survivors, as well as their families. Participants enjoyed dance-offs, relay races, face-painting and other activities through the night. UofL's Katie George, recently crowned Miss Kentucky USA, as well as the university’s women’s soccer team, performed for the kids during the event.

Since its inception, McConnell Scholars have been active in UofL’s dance marathon. More than 10 participated this year.