(June 21, 2011) LOUISVILLE, Ky. - Ernest "Rip" Patton Jr. recounts his experiences as a participant in the Nashville Movement and the Freedom Rides 50 years ago. 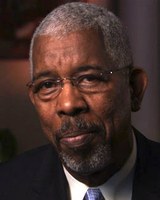 Jefferson County Public Schools and the McConnell Center, in conjunction with Facing History and Ourselves, marked the 50th anniversary of the historic freedom rides with a guest lecture by Ernest "Rip" Patton Jr., who was expelled and arrested for his participation as a rider. Patton shared his experiences with 10 freshmen McConnell Scholars and local community members June 20.

Patton, who was featured in a PBS documentary entitled "Freedom Riders,"  took part in the May 24, 1961, Greyhound Freedom Ride to Jackson, Miss., where he was arrested and later transferred to Mississippi's Parchman State Prison Farm. A 21-year-old Tennessee State drum major, he arrived in Montgomery, Ala., on May 23, 1961, to help reinforce the riders after a firebombing and siege of Montgomery's First Baptist Church two days prior.

Patton was one of 14 Tennessee State University students expelled for participating in the Rides. For the past three years, Patton has served as the Freedom Rider on an annual university sponsored Civil Rights tour of the Deep South.

The event was hosted June 20, 7-9- p.m., in the University of Louisville's Chao Auditorium (Ekstrom Library