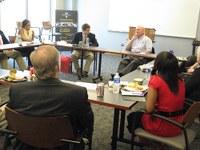 David Jones, Sr., co-founder and former CEO of Humana, sat down with several McConnell Scholars Sept. 8, 2010. The U of L alumnus shared his experience as a member of the U.S. Navy and as leader of a Fortune 100 company.

In addition to outlining critical character skills for aspiring leaders, Jones shared his thoughts on universal health care for America, the Humana "creation story" and what it was like growing up in Louisville during the Great Depression