(Jan. 19, 2016) LOUISVILLE, Ky. – Paul J. Weber, PhD, the founding director of the McConnell Center, is the first in our profile series on "25 Faces" of faculty, friends and McConnell Scholar alumni. 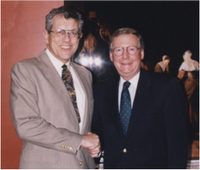 Paul J. Weber, PhD, the founding director of the McConnell Center, is the first in our profile series.

Working closely with U.S. Sen. Mitch McConnell from the McConnell Center’s beginnings in 1991, Paul J. Weber, PhD, was an integral part of fulfilling the Center’s mission of recruiting Kentucky’s best and brightest students and encouraging them to become leaders in the Commonwealth.

“He was the man I entrusted to create and build a vision for the Center, and never for a moment did I ever worry that trust was misplaced,” McConnell said. “The Commonwealth will reap the rewards of Paul’s vision and dedication many decades to come.”

Weber served as director of the McConnell Center from its inception in 1991 until 2000 when current director, Gary L. Gregg, PhD, took the helm. “Paul gave the McConnell Center an early vision to focus on nurturing students rather than serving faculty or doing research and that has proven to be one of the keys to our great success over the years,” said Gregg. “Paul’s legacy lives on as, despite our expansions, serving the McConnell Scholars remains the core of our mission.”

Weber, who joined the University of Louisville’s Political Science Department in 1976, was a beloved professor and taught courses in law, religion and politics and American government. He served as department chair from 1988 to 1997 and as the executive director of the Grawemeyer Awards from 2000 to 2004.

In 2005, he was posthumously honored for his commitment to the students he loved so much with the Minerva Award, UofL’s highest honor.

At the awards ceremony, UofL President James Ramsey called Weber “a person who epitomized what the academy represents,” and who “epitomized why we have chosen to be faculty and teachers.”

“Paul was not only a commanding leader, but also a wonderful teacher and friend to his students,” McConnell said.

Over the years, McConnell Scholars have recognized Weber’s mentorship and influence in their own lives.

“We could always count on him to guide us in our challenges and to celebrate us in our successes,” said Katie Grout Crenshaw (’96), a member of the first class of McConnell Scholars. “Dr. Weber had a way of helping us recognize that it was our responsibility to use our talents to reach the potential he so easily saw in each of us.”

Weber was especially helpful in offering career guidance to the early classes of McConnell Scholars.

“Today, I work in global health and could not be happier,” said Christa Fischer-Walker (’97), who earned a doctorate from Johns Hopkins School of Public Health and presently works for the Centers for Disease Control. “Dr. Weber was an awesome mentor and helped me realize that I would find happiness thinking beyond a career in traditional medicine.”

To many Scholars, Weber was more than a mentor – he was a friend.

“My experience as a Scholar was unique, but it was Dr. Weber that made it special,” said Tom Fisher (’96). “Dr. Weber provided a steady combination of teacher, father figure, friend and role model.”

As the Center celebrates its 25th anniversary in 2016, Crenshaw said Weber’s influence remains. “His legacy and the lessons we learned through his leadership live on in all of the students whose lives he touched.”