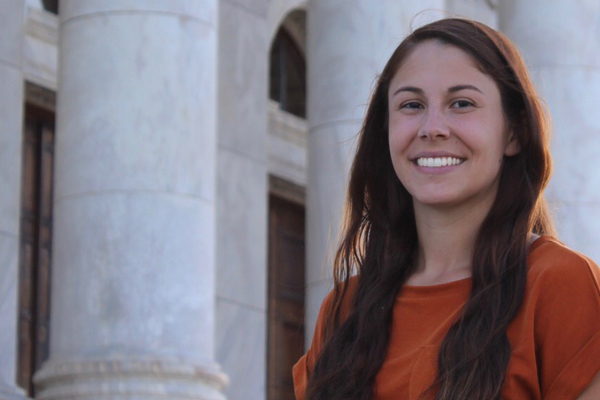 Nickole Durbin, a second-year student at Louisville Law, has been appointed a regional president for the Hispanic National Bar Association's Law Student Division.

Durbin joined the association this academic year as a way to gain networking opportunities. When she learned there was a vacancy for the region encompassing Kentucky, Tennessee and Ohio, she interviewed for the position and was appointed on the spot.

"I'm in charge of reaching out to the organizations at the schools (in the region) with job opportunities and networking events," she says. "We also have a conference in March in New Mexico and a moot court competition."

Durbin, who has family in Puerto Rico, says she was motivated to get involved with the Hispanic National Bar Association after Hurricane Maria struck the island in September 2017.

"I wanted to be connected with people who understand what I'm going through with the aftermath of that," she says.

Durbin's family is in the northwestern coastal town of Camuy, which was heavily impacted by Hurricane Maria. Her family was without power for 10 weeks, an aunt's house was flooded and her grandfather lost part of his roof.

"In comparison, we were lucky, but it was still really hard," she says.

Durbin, who was in her first semester of law school during that time, says she was deeply impacted by the natural disaster.

"My world was turned upside down. I didn't know if my family was alive for two weeks," she says, adding that she saw images on social media of Camuy's destruction but wasn't able to reach family members because cell service was down.

Durbin went to Puerto Rico two months after the hurricane. Electricity was back on, but not reliably. FEMA came to her family while she was there and she says she was struck by the small resources provided: 10 boxes of food and one case of water for five people for two weeks.

"That has really shaped my path in law school," she says. "I was really kind of unsure about where I wanted to go practice law. Since then, I've done a lot of research for my classes and I'm writing a journal article about the power crisis in Puerto Rico following the hurricane."

Durbin plans to take the Puerto Rico bar exam and wants to practice human and civil rights there.