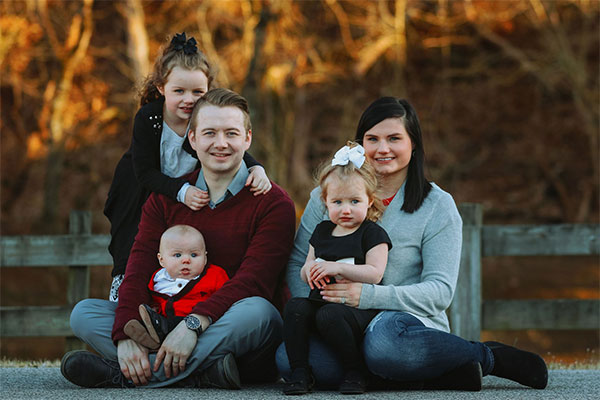 Chad Eisenback and his wife and three children. He credits his wife's support with much of his success in law school.

Louisville Law 2L Chad Eisenback came to law school with the goal of becoming a labor lawyer who would advocate for workers' rights. His passion for this area was recently recognized by the Major League Baseball Players Trust, which awarded him a $10,000 Michael Weiner Scholarship for Labor Studies.

"I can't thank them enough," says Eisenback. The scholarship is named for the late executive director of the Major League Baseball Players Association and "recognizes and supports the efforts of people who are passionate about and dedicated to improving the lives of workers – characteristics that were embodied by Weiner in his personal life, his studies and throughout his 25-year career with the Players Association."

"I admire him because he continued leading the labor movement all the way until the end," says Eisenback. "That's how I would like to be. I want to do as much as I can."

Eisenback credits the mentorship of Professor Ariana Levinson, an expert in labor and employment law. After telling his wife the news about the scholarship, "Professor Levinson was the next person I wanted to tell," he says. "She was so excited. I can't thank her enough. Without her, I don't think I'd be getting the opportunities I've gotten."

In the summer of 2018, Eisenback was a student fellow with the Peggy Browning Fund, a national organization dedicated to educating law students about workplace justice. He worked with the Industrial Division of the Communications Workers of America (IUE-CWA) in Dayton, Ohio.

This summer, he is heading to Washington, DC, where he will intern in the National Labor Relations Board's Contempt, Compliance and Special Litigation Branch.

Eisenback says his eventual goal is to be a general counsel for a union or another top leadership position.

"I just want to help workers," he says. "There's no doubt that I'm going to be a labor attorney. I like the uphill battle."