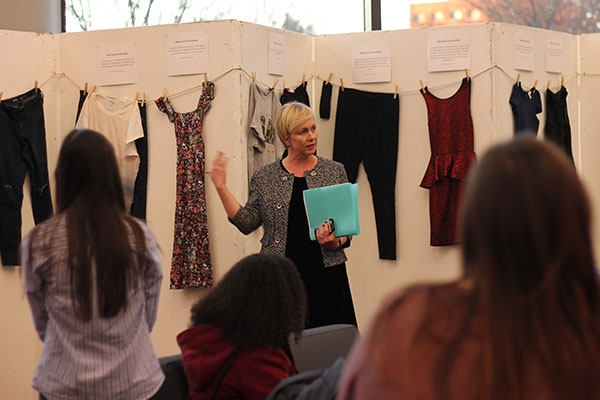 For several weeks in November 2018, the University of Louisville School of Law is hosting an art installation meant to dismantle stereotypes and assumptions many people have about survivors of sexual assault.

This installation, What Were You Wearing?, honors the survivors of sexual violence by putting on display the clothes they were wearing when they were assaulted or harassed.

The exhibit opened on November 10 with remarks from Gretchen Hunt with the the Kentucky Attorney General's Office of Victims Advocacy. It will remain on display until December 1 at two locations on campus:

"The What Were You Wearing? art exhibit has been showcased at several universities around the country. When two alums approached me about hosting it here at UofL, I jumped at the chance.

"Several student groups and staff members came together to make this event and exhibit happen. The Women's Law Caucus organized gathering the clothes — over 51 stories with multiple articles of clothing — and a lot of the clothes came from student donations. The Human Rights Advocacy Project fellows helped organize and run the opening of the exhibit and the reception, including reaching out to local organizations to set up informational tables at the reception in the law school. Gretchen Hunt from the Attorney General's Office of Victim's Advocacy spoke about the importance of the exhibit and working to make women safer.

"The art exhibit itself is meant to explode the rape myth that what a woman wears has any bearing on whether she'll be sexually assaulted. The outfits displayed, all replicas of what women were wearing when they were sexually assaulted, run the gamut from pajamas to dresses to, most horrifyingly, children's clothes.

"The stories that upset me the most are the ones with multiple outfits; showing that a woman was assaulted multiple times in her life, often beginning when she was a child. The stories are short but powerful and a reminder that sexual assault is not a woman's problem to fix — there is no trick to not being assaulted, no clothes someone can wear as protection — it is up to men and, to a lesser extent, our entire society that has to take on this challenge. Women are the survivors of sexual assault, not the cause."

Coverage of the exhibit: