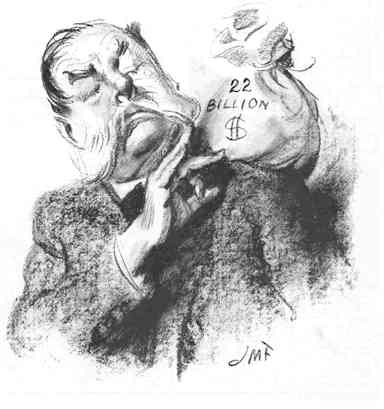 In 1912, Woodrow Wilson campaigned for President using many Progressive ideas about strengthening the economy: banking reform, tariff reduction and the elimination of monopolies and trusts. The consolidation of these ideas became known as the New Freedom.

After Wilson's election, Louis Brandeis (who was responsible for many of Wilson's ideas in the first place) wrote a series of articles for Harper's Weekly which outlined why the New Freedom was necessary and how best to implement it. In 1914, the articles were collected in book form and published under the title Other People's Money--and How the Bankers Use It.

Brandeis' central thesis was that the large banking houses were colluding with businessmen to create trusts in America's major industries. Brandeis felt that not only did trusts stifle competition, but also they became so large that they became unable to operate efficiently.

Brandeis backed up his arguments with facts--copious facts gleaned from his battles against J. P. Morgan and Charles Mellen in the New Haven Railroad merger battle and from the Pujo Committee--a House committee report that investigated the abuses of the "Money Trust."

Wilson was able to push through a number of laws regarding the regulation of business and trusts, but in many ways, due to mergers and stock manipulation, conditions in the business world today remain the same. Many of the details in Other People's Money may be dated, but its central ideas remain relevant--so much so that it is still in print almost 90 years after it was first published.

Chapter I: Our Financial Oligarchy

Chapter II: How the Combiners Combine

Chapter IV: Serve One Master Only!

Chapter V: What Publicity Can Do

Chapter VI: Where the Banker is Superfluous

Chapter VIII: A Curse of Bigness

Chapter IX: The Failure of Banker-Management

Chapter X: The Inefficiency of the Oligarchs

Note: All illustrations on these web pages are from the original Harper's Weekly articles that were incorporated into the book.