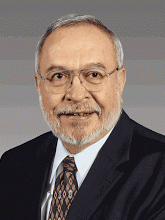 Public Relations Society of America’s Landmark of Excellence Award. In addition, Ben is the recipient of significant community awards for his volunteer work: namely, the National Oracle Volunteer of the Year Award and Lifetime Service Award for the Corn Island Storytelling Festival. In 1994, Ben and Sonia Ruiz were appointed as Kentucky Colonels. Ben has served on various community organizations’ boards: The Mayor’s Louisville

Ben and his wife, Sonia, have three children: Monica, Ben and Marcella who have all married and live nearby in Kentucky.