Anti-Asian hate crimes in the U.S., including harassment, victimization, and assaults, have increased dramatically since the beginning of the coronavirus pandemic, including a near-fatal stabbing of an Asian American man on Thursday in New York.  Estimates suggest anti-Asian hate crimes across the country have increased by between 2,000% and 3,000% in the past year.  Asian Americans in Kentucky are also experiencing harassment and discrimination in the face of the pandemic, as described in this account:  https://www.wdrb.com/news/louisville-doctor-of-korean-descent-says-he-was-kicked-out-of-indiana-gas-station-because/article_ce09b57e-747f-11ea-b875-f79c7ea5c776.html

We also know that this latest rise in hate crimes is a continuation of a long legacy of anti-Asian bias in the U.S., including the Chinese Exclusion Act of 1882; the Immigration Act of 1924, which excluded immigrants from all Asian countries that were not U.S. territories; Japanese American internment during World War II; stereotypical and limited portrayals of Asian Americans in the media; and Asian Americans experiencing the largest within-group income inequality gap of any racial group.

To find out more about how to help combat Asian-American harassment, discrimination, and violence, please see the links below: 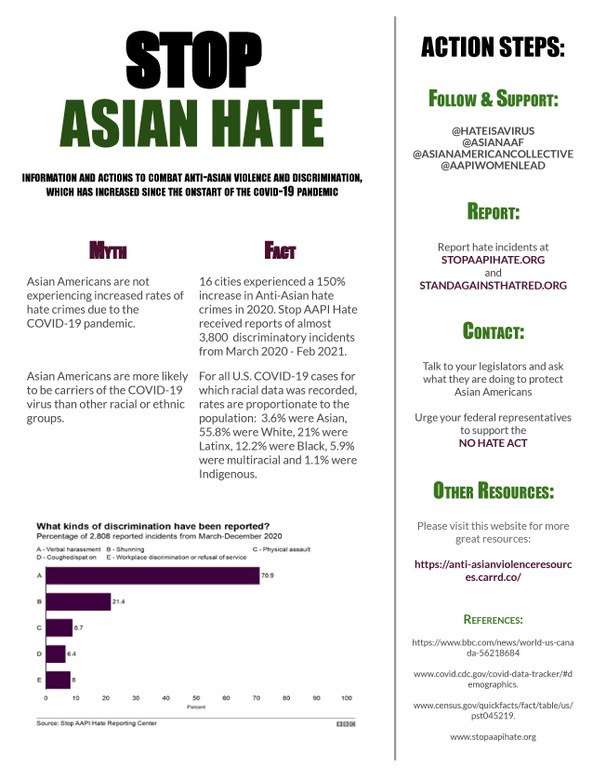