Love Notes, is an evidence based, relationship based, national program with youth curriculum aimed at youth ages 14-24 that addresses healthy romantic relationships and communication skills; including, how to seek and give consent, information to help prevent risky sexual behavior, pregnancy, dating violence, sexual coercion, human trafficking, and suicide. Infused in the curriculum is information about how alcohol and drug use compound youth vulnerability in these areas.  The Kent School of Social Work received a 2-year Sexual Risk Avoidance Education grant in 2017 to implement Love Notes through CHAMPS2 (Creating Health Adolescents through Meaningful Prevention Services.)

Initially, team members found it challenging to recruit youth even after enlisting the cooperation of seven community-based organizations to enroll up to 700 youth.  Most could not fulfill their promise, but they were able to engage other organizations to take part in the program, especially various high schools. This high-quality program provided fun, engaging and relevant activities such as, role plays, art, music, videos, and games.  Participants received Love Notes workbooks, free breakfast, lunch, and snacks.  Other incentives included were:  backpacks, t-shirts, notepads, pens, chapstick, $20 gift cards at the training, and the option to earn another gift card later, and door prizes such as headphones, tablets, and portable phone chargers.

The CHAMPS2 small team was able to make a large impact on Louisville youth by training 130 Love Notes facilitators and supporting them to provide Love Notes to over 1000 youth over 18 months. Team members worked together to recruit youth, create training boxes, deliver Love Notes materials, provide evaluations, and collect/organize data.  Each team member worked hard to ensure the success of the program, often working evenings and weekends.

“As a social worker, it is professionally rewarding to see that the interventions you use are making an impact on your clients. It was fascinating to watch Love Notes as it was taught because I saw the effect it made on the youth in the class almost immediately, as well as longer-term effects. There were times when I witnessed that a participant had just realized that they were currently in an unhealthy relationship. There were also times when one lesson would plant a seed that something in their relationship wasn’t quite healthy for them, and then I would return to fidelity check the next lesson and a youth who had previously felt they were in a positive relationship would now be discussing ways in which their partner’s behavior may be unhealthy. It is so encouraging to see that youth who go through the Love Notes program are given the information and tools to pace their relationships and determine if they’re healthy.”  Patricia Smith, Data Manager. 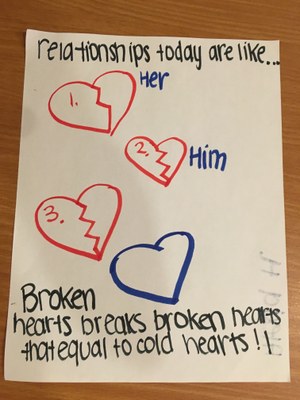 One of the goals within the CHAMPS2 Love Notes Healthy Relationship Program was to add a suicide prevention focus to the program.  Post survey results indicated that the number of youth that reported feeling a desire to die, suicidal ideation, suicidal plans, suicidal intent and suicide attempts statistically decreased after completing the Love Notes program.  Likelihood of seeking emotional help for suicidal thoughts by talking to a parent, relative, phone helpline, doctor or a religious figure increased.  Additionally, more youth reported that they were less likely to have sex until they were older and use an effective method of birth control when they do.  Overall, youth seemed to have a better awareness of healthy behaviors.

In addition, the program partnered with the Louisville Youth Group to reach the goal of updating Love Notes language, images, and activities to be more inclusive of the LGBTQIA youth served.   Sam Cooper studied these changes for her evidence-based project in SW 668 and 669. The team was able to present these positive findings at the national Adolescent Pregnancy Prevention Annual Conference in New Orleans in June 2019.

“We are motivated to improve the lives of very vulnerable youth who are at high risk for many problems by both testing the efficacy of programs and delivering evidence-based programs. While we have had the opportunity to reach over 2500 youth including those in the foster care and juvenile justice systems, refugee and immigrant youth, homeless youth and those from oppressed minorities over the past decade, our next goal is to scale up the dissemination of Love Notes to reach youth across the entire state of Kentucky through a pay for success model.”   Anita Barbee, PI

The grant ended on September 29, 2019. but for sustainability purposes materials were disseminated to partner agencies and schools to continue to deliver Love Notes to their youth.  Another 1000 youth are likely to be reached this coming year.