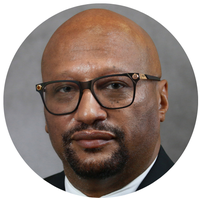 Dr. Robinson is an Associate Professor and MSW Admissions Coordinator, he also serves as the MSW/MDiv dual degree Coordinator, the Coordinator for the Marriage and Family Therapy Certificate Program and the Director of Maymester Studies Abroad Program in Northern Ireland at the University of Georgia. His research interests address the health and well-being of African Americans and other underserved populations, particularly in relation to substance abuse and mental disorders, and social issues affecting African American men.

Dr. Robinson is the author and co-author of numerous publications. His work has appeared in publications such as the Journal of Social Work Education, the Handbook of African American Health: Social and Behavioral Interventions, and the Community Mental Health Journal. Dr. Robinson has also appeared on PBS Panhandle and public radio. He is currently serving on the Board of Directors of the Council on Social Work Education, the Chair of the Commission for Social and Economic Justice, and he formally served as the Chair of the Council for Racial Ethnic and Cultural Diversity. He also serves on the editorial board of the Journal of Ethnic and Cultural Diversity in Social Work.

Dr. Robinson has earned numerous awards and recognitions including, 2018 Fahs-Beck Fellow by the Fahs-Beck Fund for Research and Experimentation, 2018 First Year Odyssey Teacher of the Year Award, 2017 Conference on Racial Ethnic and Cultural Diversity Award for the most impactful article, and the winner of the 2019 Florence W. Vigilante Award where he co-authored a publication with scholars here at U of L and across the country.

Michael and his wife, Michelle, reside in Georgia. He has four sons, Justin, Alvin, Joshua, and Caleb.