This course examines the beliefs, practices, and literatures of the major religions indigenous to South and East Asia (Hinduism, Buddhism, Confucianism, Daoism, and Shinto) from the perspectives of the humanities and the social sciences. The outline of the course proceeds geographically from South Asia (Indian subcontinent) to East Asia (China and Japan), and chronologically from ancient times to the present. Readings include primary texts in translation and background material on the history and development of each of the traditions examined.

Note: This section is restricted to students active in the University Honors Program AND to non-Honors students with a GPA of 3.50 or higher. Please call Honors at 502-852-6293 for more information.

This class is an introduction to Jewish cultures, identities, and histories. It explores the diversity and multiplicity of the Jewish minority and majority experience by a focused look at ideas, historical events, and artifacts of Jewish material and artistic cultural production from antiquity to the contemporary times. Elements of social and cultural history relating to Jewish ethnic and cultural identity will be examined by a look at selected humanities artifacts from literature, film, theatre, music, costumes and clothing, architecture, cuisine, and more. Attention will be placed on how gender and ethnicity influenced the creation, design, and consumption of cultural artifacts. The class readings and discussions will reflect on the meaning of these experiences for contemporary questions of prejudice, tolerance, inclusion, and identity, within and beyond Jewish life. 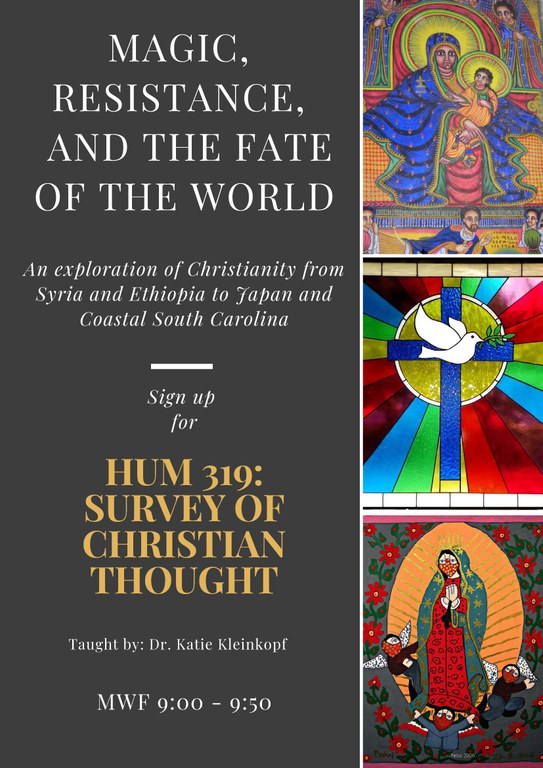 HUM 319-01. Magic, Resistance, and the Fate of the World (Survey of Christian Thought, Religion, and Culture)

Welcome to the Survey of Christian Thought, Religion, and Culture! This course explores the multifaceted religion we now call Christianity from its conception as the Jesus movement in the Middle East through its modern manifestations in Liberation Theology’s fight for social justice in Latin America, as well as the Gullah/Geechee traditions which grew out of African enslavement in Costal South Carolina. Not only will we examine the effects of oppression, colonialism, and imperialism, both upon and enacted by Christians, but we also will bring to light aspects and practices of Christianity which are ignored or downplayed by everyday practitioners as well as the Church. By the end of this course, we will learn to explode categories of heresy, orthodoxy, magic, and religion to explore how, for thousands of years, people have grappled endlessly with what it means to be Christian. Prerequisite: Sophomore standing.

Time-traveling adventurers! Cocaine-addicted super-sleuths! Lesbian vampires! HUM 321 is a survey of the origins of modern horror, science fiction, and detective fiction in the 1800s, with an emphasis on the ways in which the three styles of fiction are often interrelated and often the product of the same author’s imagination. Writers include Mary Shelley, Edgar Allan Poe, H. G. Wells, Emily Brontë, Guy de Maupassant, Arthur Conan Doyle, and more. Much of the reading will be short fiction, with a few essential novels such as Frankenstein and The Time Machine along the way. We’ll also discuss modern adaptations and the ways in which so much of popular culture in the twenty-first century is rooted in the literature of the nineteenth century. Join us for the adventure! Prerequisite: Sophomore standing. 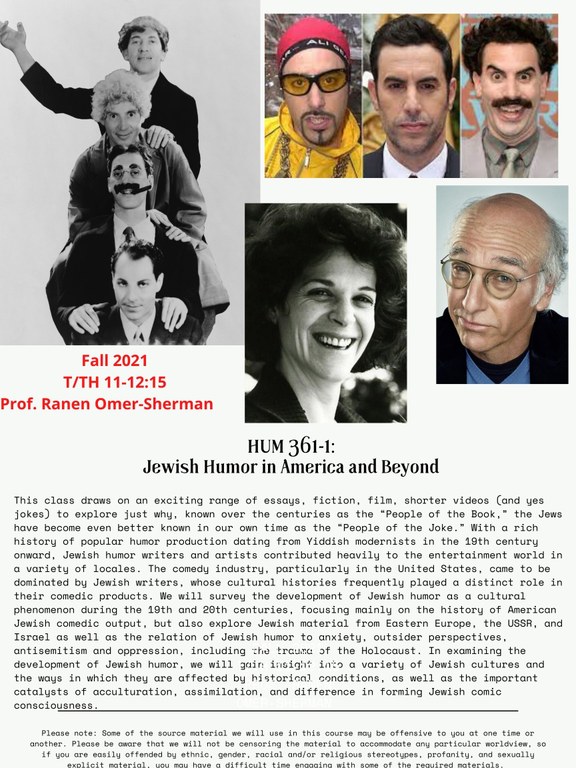 HUM 361-01. Selected Topics: Jewish Humor in America and Beyond

This class draws on an exciting range of essays, fiction, film, shorter videos, and, yes, jokes to explore just why, known over the centuries as the “People of the Book,” the Jews have become even better known in our own time as the “People of the Joke.” With a rich history of popular humor production dating from Yiddish modernists in the nineteenth century onward, Jewish humor writers and artists contributed heavily to the entertainment world in a variety of locales. The comedy industry, particularly in the United States, came to be dominated by Jewish writers, whose cultural histories frequently played a distinct role in their comedic products. We will survey the development of Jewish humor as a cultural phenomenon during the nineteenth and twentieth centuries, focusing mainly on the history of American Jewish comedic output, but also explore Jewish material from Eastern Europe, the USSR, and Israel, as well as the relation of Jewish humor to anxiety, outsider perspectives, antisemitism and oppression, including the trauma of the Holocaust. In examining the development of Jewish humor, we will gain insight into a variety of Jewish cultures and the ways in which they are affected by historical conditions, as well as the important catalysts of acculturation, assimilation, and difference in forming Jewish comic consciousness. Please note: Some of the source material we will use in this course may be offensive to you at one time or another. Please be aware that we will not be censoring the material to accommodate any particular worldview, so if you are easily offended by ethnic, gender, racial, and/or religious stereotypes, profanity, and sexually explicit material, you may have a difficult time engaging with some of the required materials. Prerequisite: Sophomore standing.

HUM 516-01. Topics in the Histories of Religion: Sufism (Islamic Mysticism)

Some Reasons UofL Students Might Want to Take TA 571/HUM 561:

The particular “perspective” on modern culture that this course provides is through the vehicle of myth. In the assigned chapter from A Short History of Myth, Karen Armstrong maintains that the modern ascendancy of rationality and scientific temperament provided for our material and physical comfort, but did little to address the emotional, communal, and spiritual yearnings engaged by a mythic way of thinking. Many artists and thinkers of the last 150 years have attempted to restore this sense of wonder, connection, and significance, and to redefine it in terms that honor modern sensibility. In light of this productive tension between mythos and logos, many of the cultural phenomena of the nineteenth, twentieth, and twenty-first centuries can be approached and illumined through modern artists’ use of the subject, tropes, and structures of ancient myth.

Note: May be repeated up to three times under different topics.

The Medieval Period in the West covers 1,000 years (ca. 500–1500), during which time Germanic, Roman, Hebrew, Christian, and Islamic cultures merged into a unique new culture with multiple facets. During these 1,000 years, people lived full lives, coping with new political and social realities yet probing the invisible world for answers to compelling questions. The answers might be philosophical, or religious, or magical, or practical. Medieval people revered authority and loved tradition, but welcomed practical change and material gain. Sound modern? Yet their world view differed radically from our own. Our goals will be to compare and contrast their world view with our own and to contrast modern perspectives on the period with medieval self-perceptions. In specific, we will focus on Medieval views of the sacred and profane, of body and spirit, of faith and reason, and of fear, joy, and laughter in their many manifestations, examining what Medieval perceptions were, as compared and contrasted with our own. While our study will be of the Western legacies that survive the period and still astound and surround us—the Christian Church as an institution, the Gothic cathedral as embodiment of the sacred, and the University as the cornerstone of intellectual freedom, we will consider them in their global context.

From Charlie Chaplin’s 1917 silent movie Easy Street to the 2018 film First Reformed, feature films have explored the promises and shortcomings of religious faith and institutions. Because films about religion consider values, beliefs, or perspectives that are important at the time of their release, popular films about religion can serve as an index to religious anxieties and preoccupations. This course will trace the history of religion and film decade by decade from the silent era to the twenty-first century, focusing on the themes, values, and contexts of films about Christianity, Judaism, and Islam—the predominant religions in North America.

An introduction to phonetics and phonological theory; study of the nature and organization of sound in language. Prerequisite: LING 325 or ENGL 325 or equivalent; junior standing.

For an up-to-date schedule, please consult the online Schedule of Classes.